How To Put Up A Gazebo Without Instructions by Yourself

Do you have a gazebo whose assembly instructions got lost somewhere along the way? Don’t fret, putting up a gazebo without instructions is fairly simple. The simplicity will depend on the type of gazebo you have, however… 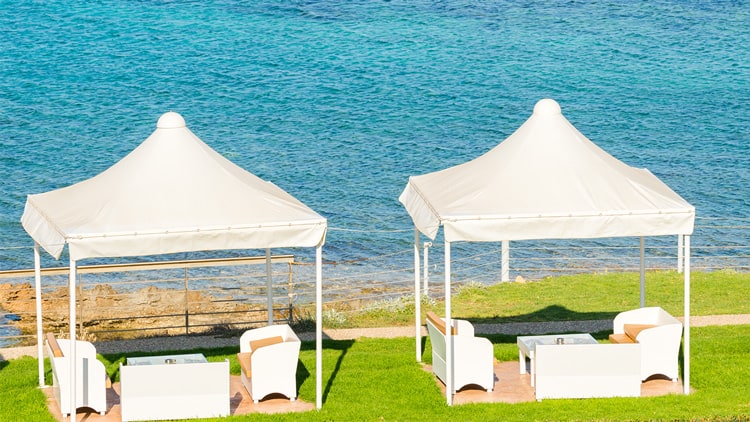 In this article, we will look at how to put up a simple pop up gazebo without instructions.

How to put up a gazebo without instructions

Gazebos are tricky to assemble with instructions so putting them up without instructions may seem impossible. Fortunately, it’s not that bad. If you’re willing to try, follow the steps below to get you started:

Step 1: Gather everything you’ll need for the assembly

This step isn’t as simple as it sounds. You’ll have to figure out if any pieces of the gazebo are missing and if so, locate them.

You will need a large level area to work on. If you have an idea of what the erected gazebo looks like, you can easily place the poles on the ground in the position you think they need to be in. If not, you can take a look at the canopy to figure out how long the legs and the sides are and place poles accordingly.

It’s easiest to start with identifying and placing the legs of the gazebo. The legs are easy to identify due to the foot piece attached to them and the extra holes where the canopy attaches.

Once that is done, identify the four long sides of the gazebo. One side might be made up of two or even three poles so you’ll have to find between 8 and 12 poles that all look the same and fit into each other. Lay them out in a square between the legs you already identified. Line up the legs with each corner.

Now you’ll be left with a bunch of smaller poles that make up the rest of the canopy frame.  Start by identifying the 4 small poles that go right at the top and place them on the ground. Now identify the poles that fit into them and lie these on the ground. If you still have poles left, you’ll probably have to add more poles to the canopy in the same way.

Now that you have an idea of which pole goes where you can start assembling the structure. It’s easiest to start the assembly in the middle of the canopy with the 4 small poles. Work your way around the structure in a circle and assemble all the poles until the top part of the frame is assembled and lying on the ground.

Now if you’re working alone, it is best to put on the canopy cover at this point. It will make it easier to keep your structure in place. Simply drag the canopy cover over the frame and attach it with the velcro to the poles. Once done you can move on to assembling the legs.

Once you’re finished, find a way to mark the poles with different coloured tape, stickers or paint to make it easier to match them up in the future.

Now that you’ve done the most confusing part, you can relax and apply the finishing touches. All you have to do for this step is make sure all the velcro of the canopy cover is attached to the frame and properly pulled into place and secured.

Your gazebo is now assembled, well done! Unfortunately, you’re not done yet.

This step has nothing to do with the assembly, but it is very important. Anchoring your gazebo stops it from blowing away in the slightest wind. Gazebos that go flying in the wind have the potential to cause injuries to people and animals and damage to properties. Nobody wants that.

You can use the method of your choice to secure your gazebo. The options are rope and tent pegs, storm straps and weights.

Make sure you have all the required pieces. If you’re sure nothing is missing, make sure the roof struts aren’t stuck and that nothing is broken. If everything is in place, move the gazebo to a level surface with a lot of space to work in.

You will need a partner to help you with this step. Grab two legs of the gazebo each and lift the frame off the ground. Take a small step back and allow the gazebo frame to open. Make sure not to pull too hard since that action can bend the frame.

Now you can push the top and the bottom of the diamond frame by the side supports together to lock them in place. This will further extend the legs. 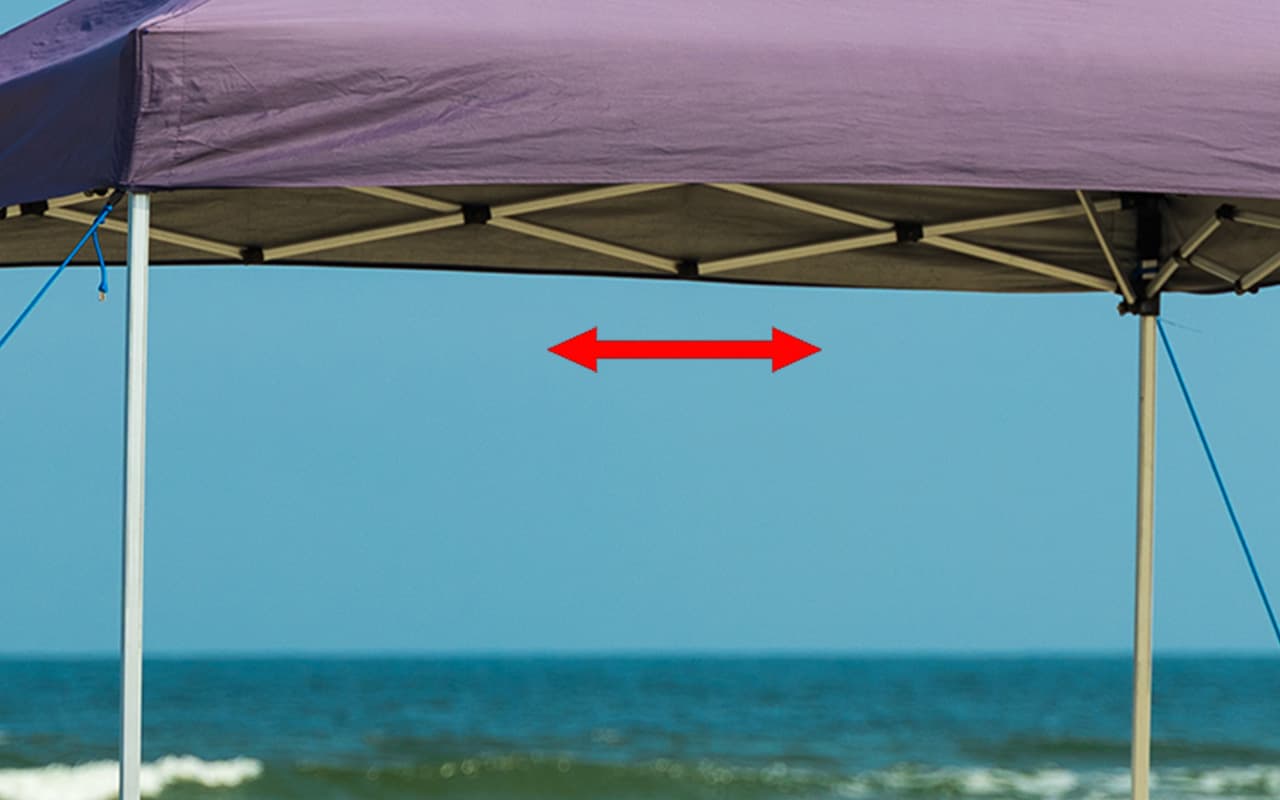 This diamond structure must be extended as much as possible.

Do this with every diamond in the frame while switching from leg to leg until the gazebo frame is fully open and the diamond frame is locked into place fully extended.

Engage the slider at each corner to extend the leg. You will hear a click when it is fully extended and secured into place. Repeat with all the legs. Now your frame is ready.

Once your frame is ready, you can add the gazebo cover. 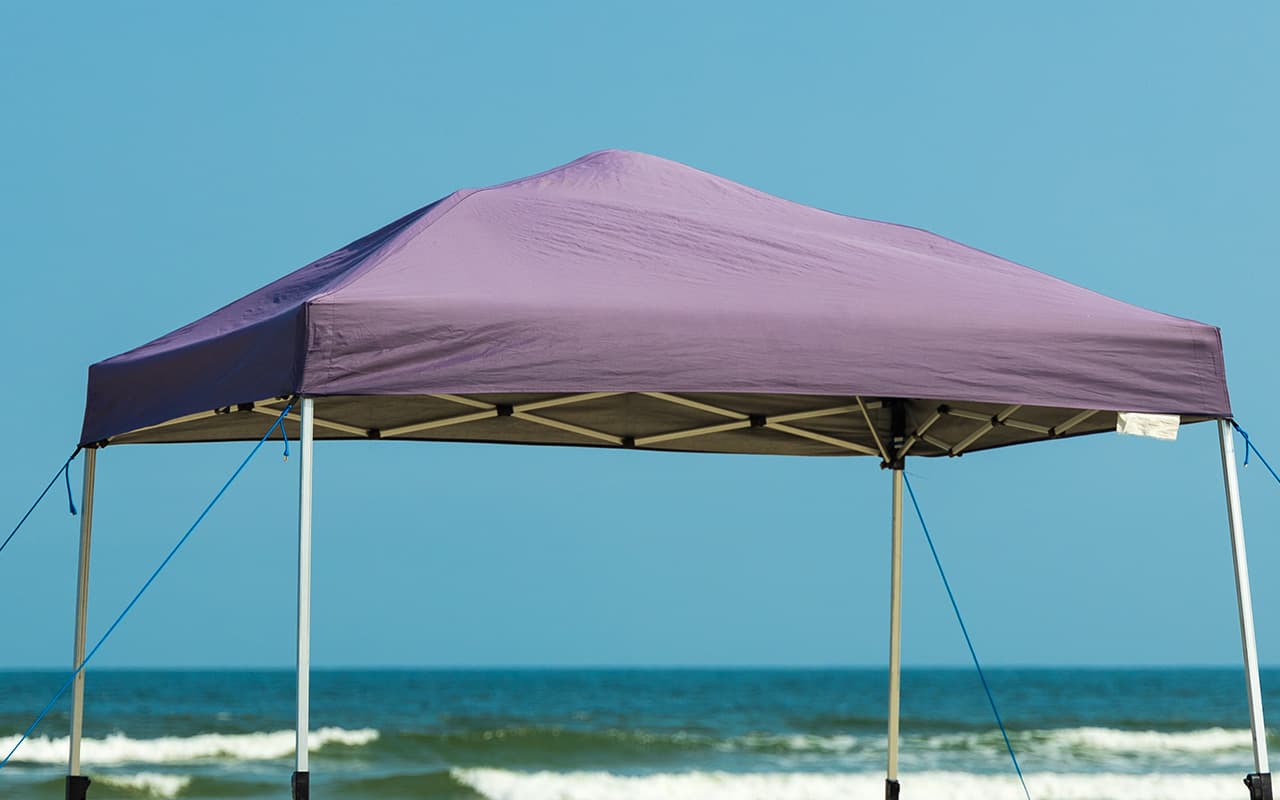 Once the legs are extended you’ll be able to secure the canopy over the frame.

Ask your friend to grab a corner and simply pull the cover over the frame. Secure it in place by attaching all the velcro attachments to the frame.

Once you’ve secured the cover, ask your friend to mimic you. Step on one of the foot pieces of the gazebo while pulling the rest of the frame upwards. This will extend the leg again making the gazebo higher. Do this with all the legs. 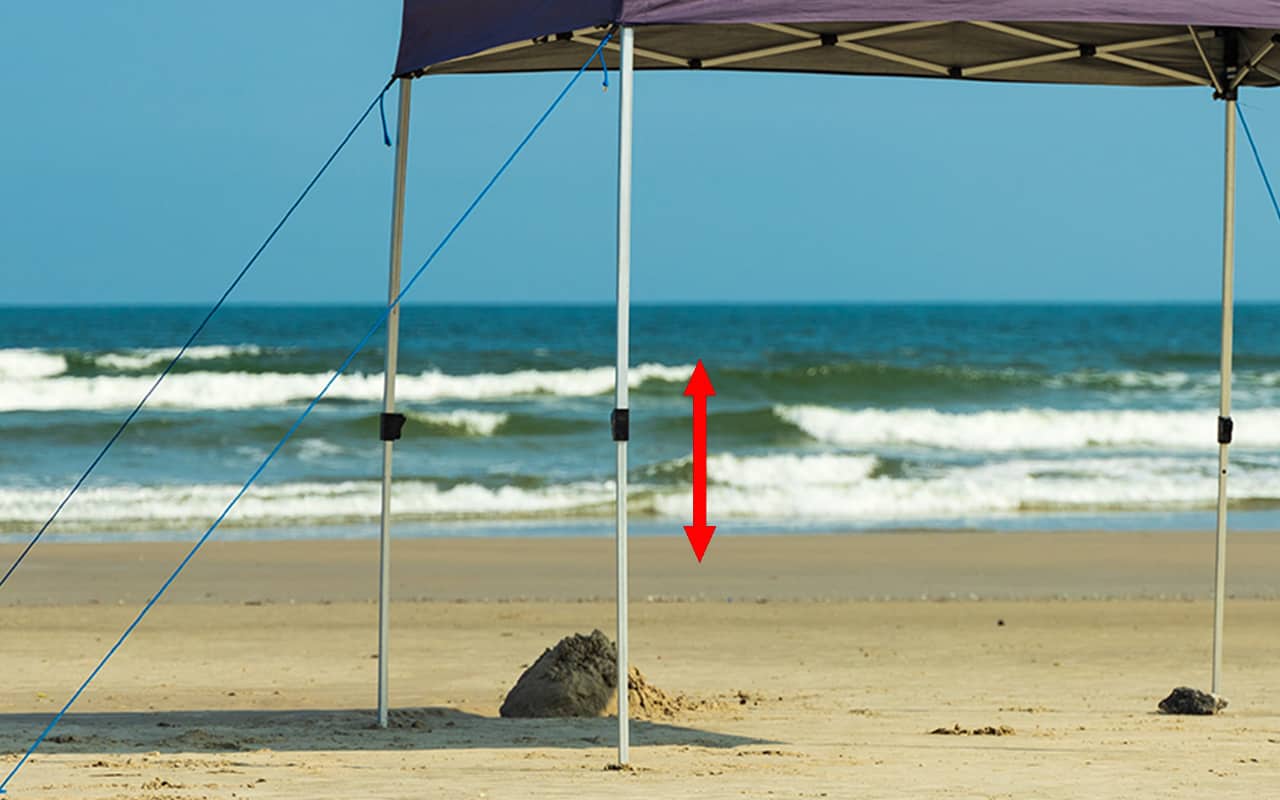 The gazebo legs need to be fully extended.

Once done, secure the rest of the cover into place on the now extended legs.

Just like with the previous gazebo, you’ll also have to secure this one in place. it is very important for safety reasons.

Anchoring your gazebo keeps it from blowing away in the slightest wind. Flyaway gazebos can injure people and animals and damage properties. 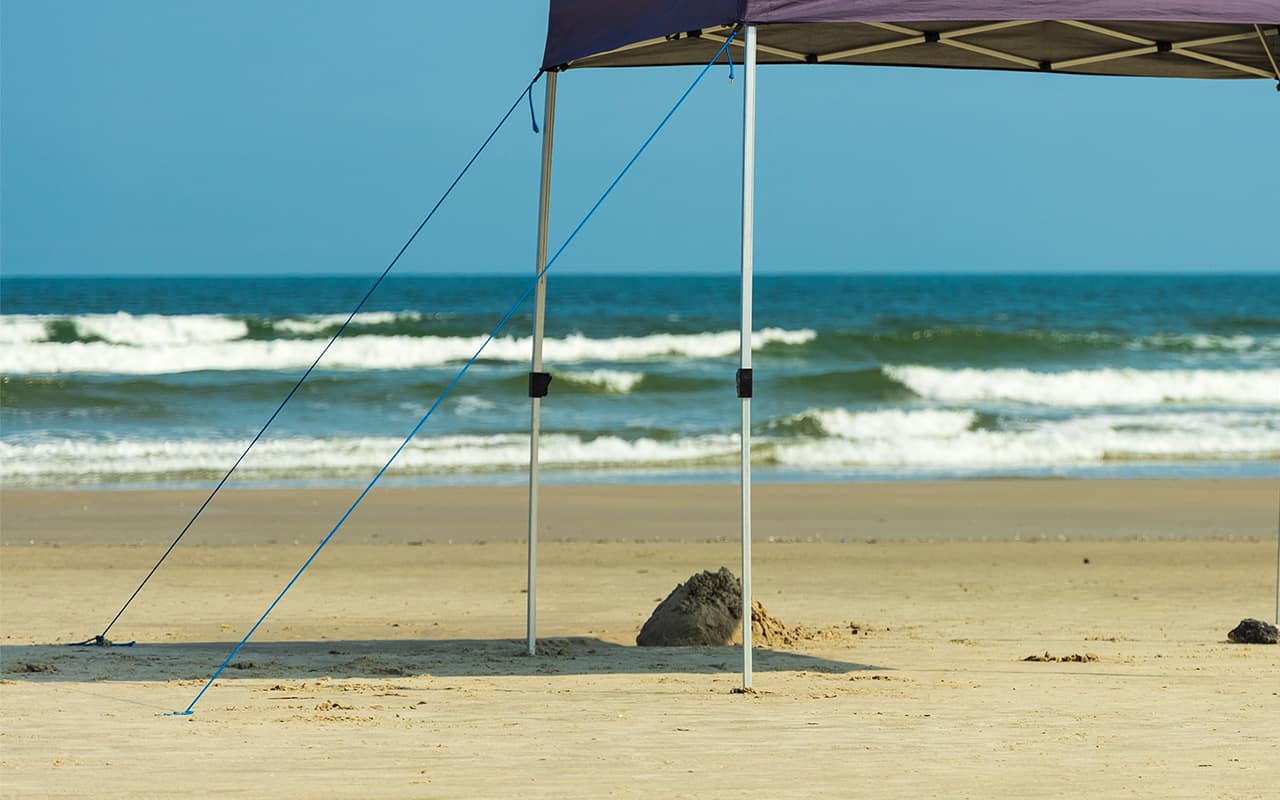 Tent pegs and rope is the easiest way to secure a gazebo.

You can use the method of your choice to secure your gazebo. The options are rope and tent pegs, storm straps and weights.

How to put up a garden gazebo

If you have a more permanent gazebo that you’d like to assemble, it might be best to google the brand of your gazebo to get the instructions.

Permanent garden gazebos are very heavy and have quite a few parts so do make sure to take some safety measures before you start. You could also bring in some professional help if you’re not up to this massive task or don’t have all the tools required.

Follow this link to GazeboSpareParts.co.uk where they have compiled a huge list of PDF/Image files for Gazebo instructions.

How to put up a gazebo by yourself?

It is possible to put up a gazebo by yourself, but it’s not recommended. For a pop-up gazebo, it might be nearly impossible to do it yourself. With a lot of patience, however, you should be able to separate the legs and straighten out the diamond frame.

How to assemble a gazebo frame?

A gazebo frame is fairly easy to assemble if you have the instructions. If not, you’ll have to work out which pole goes where and mark them to make future assembly easier. 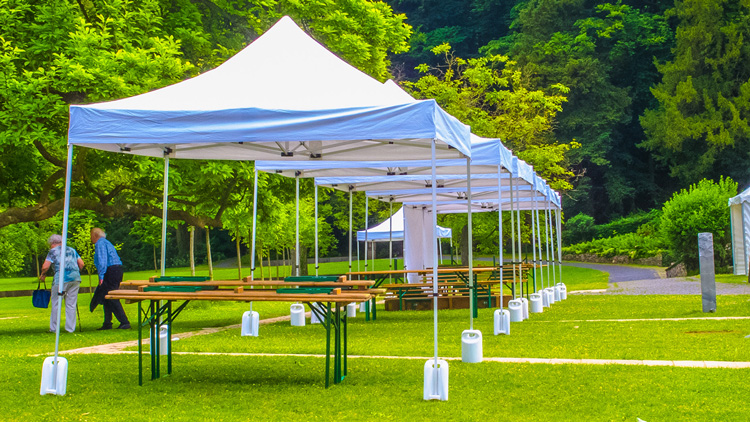 How To Take Down A Pop-Up Gazebo Quickly 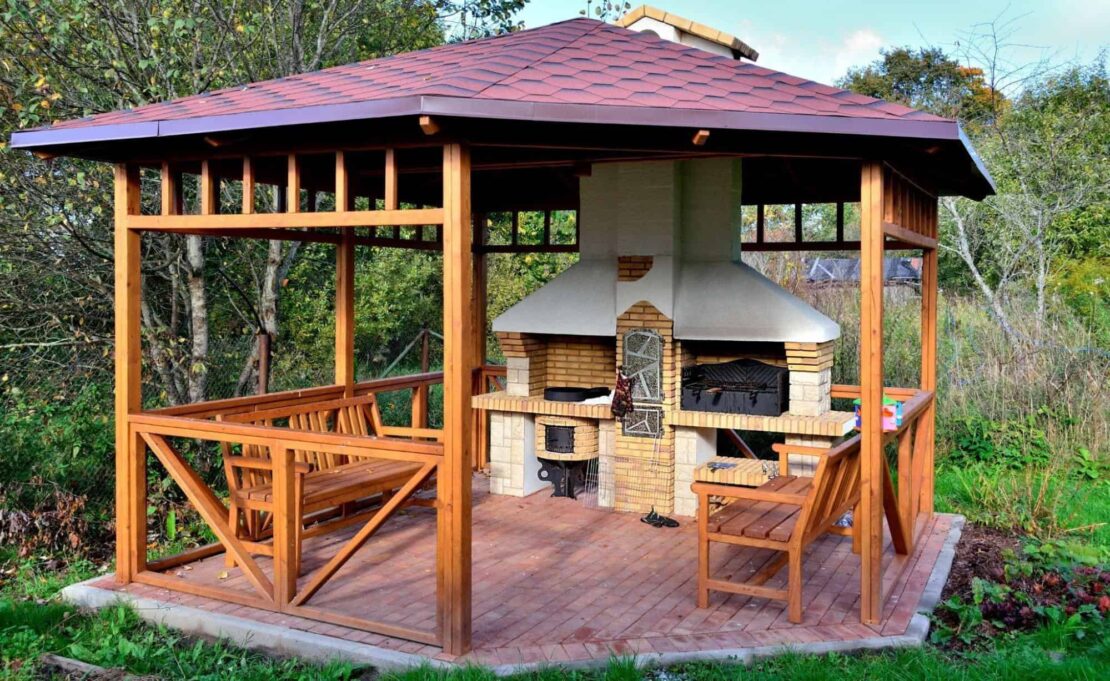 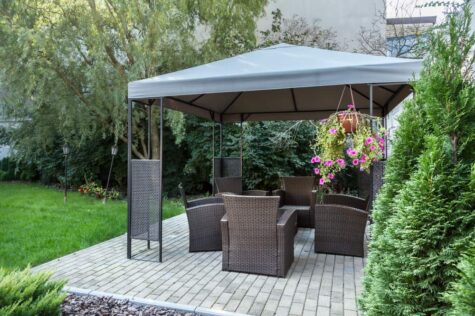 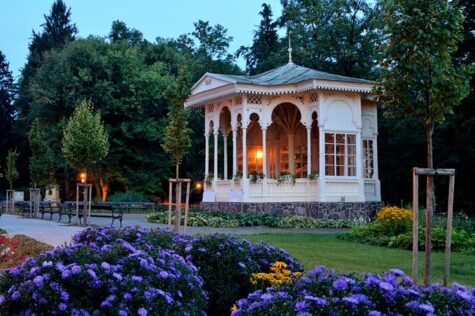 What Size Gazebo Do I Need? 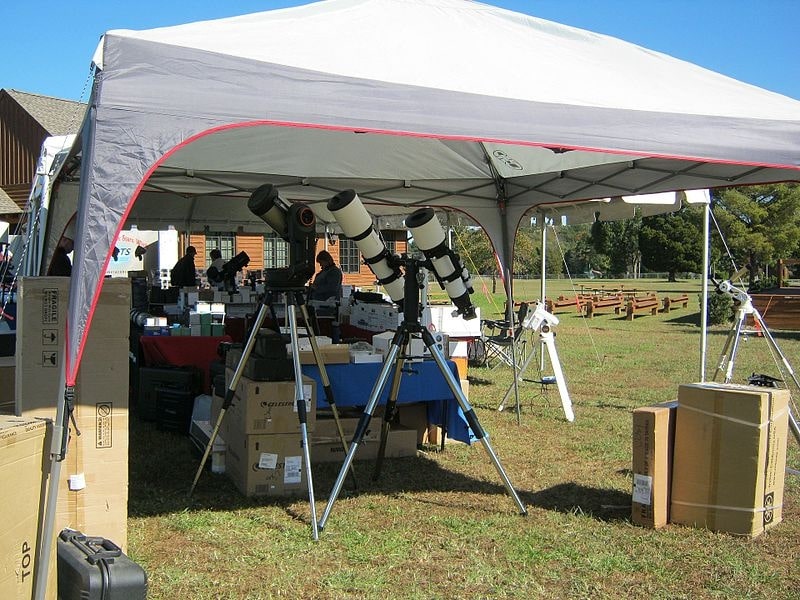