When the weather turns colder, many visiting summer birds leave our shores for warmer climes. Several species migrate to the UK from mainland Europe to overwinter, leaving even harsher conditions and prolonged sub-zero temperatures behind.

Discover which birds you might be lucky enough to see in your winter garden and some tips for helping to care for them. 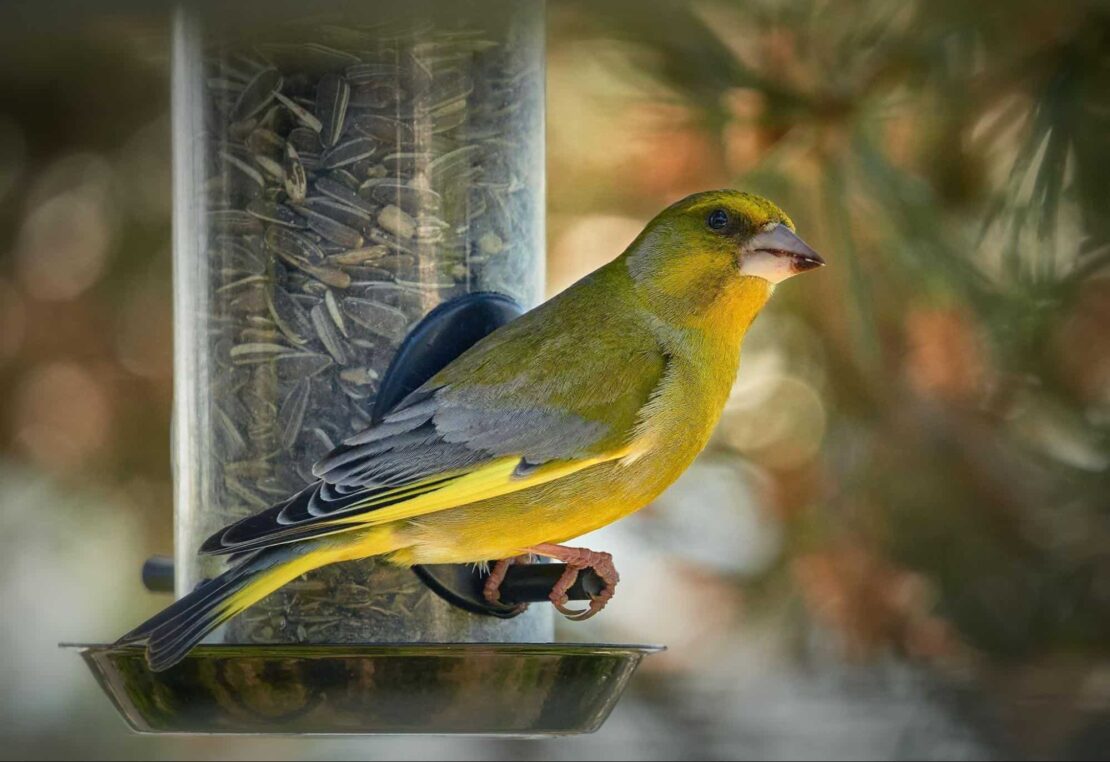 Photo by Vidar Nordli-Mathisen on Unsplash

Colourful greenfinches are regular guests in UK gardens. They’re more common in the south during winter where they fly down from Scotland and Northern England. Some birds will migrate to France and Spain for the colder months but many remain here to ride out the changeable British winter.

These pretty birds are an olive green colour with flashes of yellow on their wings and tails. They’re increasingly common in gardens as intensive farming has resulted in a huge decline in their food source. Greenfinches mainly eat seeds and will enjoy eating black sunflower seeds and peanuts. 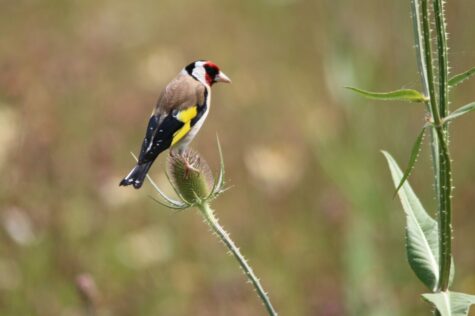 Photo by Steve Harris on Unsplash

Like the greenfinches, goldfinches are partially migratory so some will remain in the UK year-round, while others will seek milder winter climates in France, Belgium and Spain.

Thousands of these little birds were trapped and kept as caged birds during the 19th Century which saw a huge decline in their natural population. Fortunately, they’ve made a strong comeback and you can tempt them to your garden by planting teasels and thistles and leaving out their favourite niger seeds.

Did you know? A group of goldfinches is called a charm. 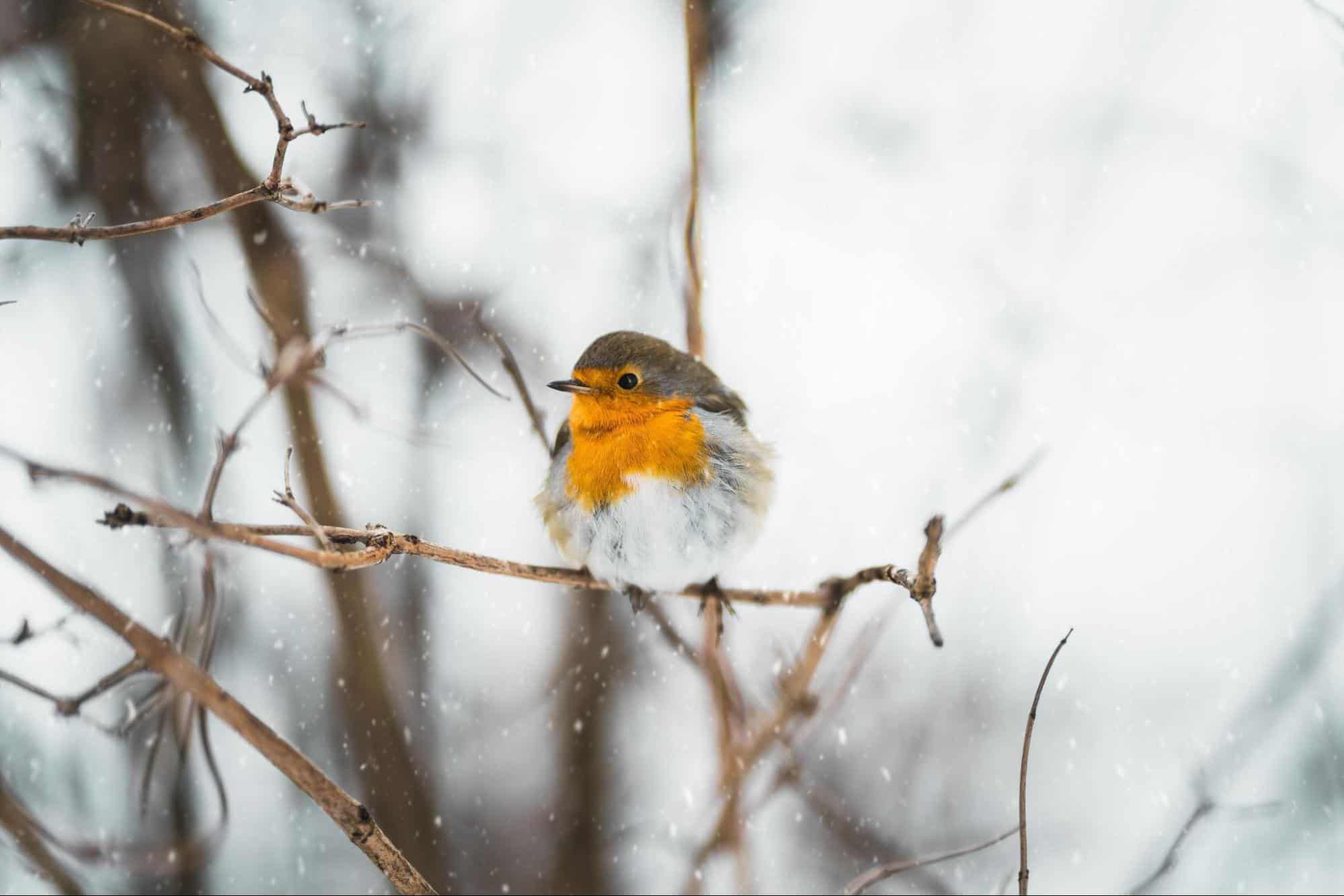 Photo by Simon on Unsplash

The most famous of the winter garden birds, the bold robin redbreast is a regular visitor to gardens around the country. There are an estimated 6-7 million robins in the UK, making them one of our most common birds.

In general, robins don’t travel too far but some females do migrate for warmer weather in the autumn. As cute as they look, robins are fiercely territorial and will fight off other birds that land nearby.

Robins are ground feeders, they’ll often follow you around the garden if you’re digging, hoping for a tasty worm or two. Snow and frozen ground is bad news for robins so leave out a tray with mealworms and sunflower seeds to help them survive the coldest winters.

Contrary to popular belief, both male and female birds have red breasts and white wing bars and it’s incredibly difficult to tell them apart.

Unlike many other birds, robins will sing cheerily all year round, I have one chirruping away on my fence as I write this article on a cold, rainy January day. 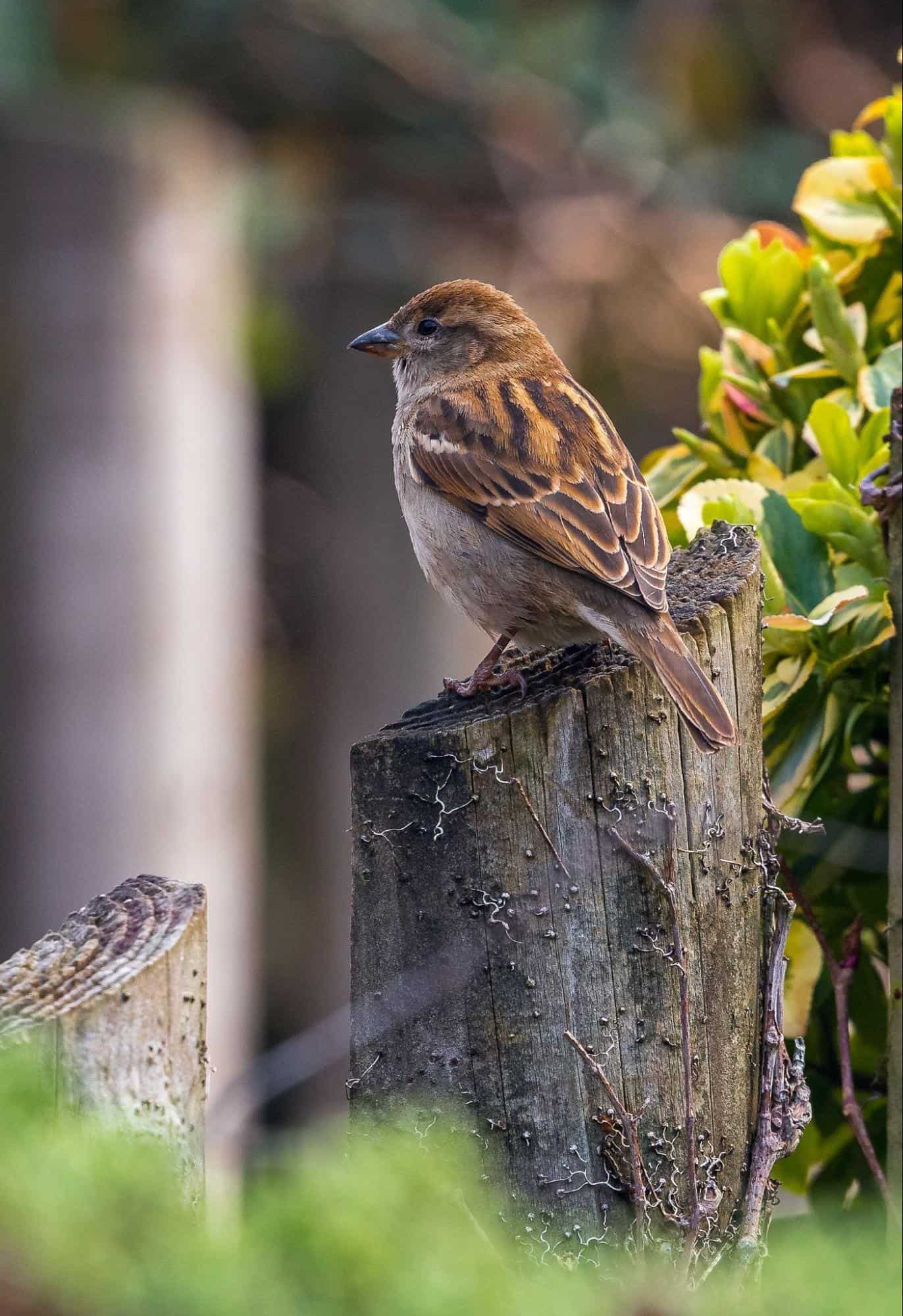 Photo by Andy Holmes on Unsplash

House sparrows are year-round UK residents. They are fairly sedentary birds, sheltering in dense hedgerows and accessible roof spaces. They’re one of the most common visitors to our gardens and usually stay within one kilometre of their home!

Sparrows aren’t fussy eaters and will eat almost anything, they enjoy mealworms, suet and nuts as well as kitchen scraps. 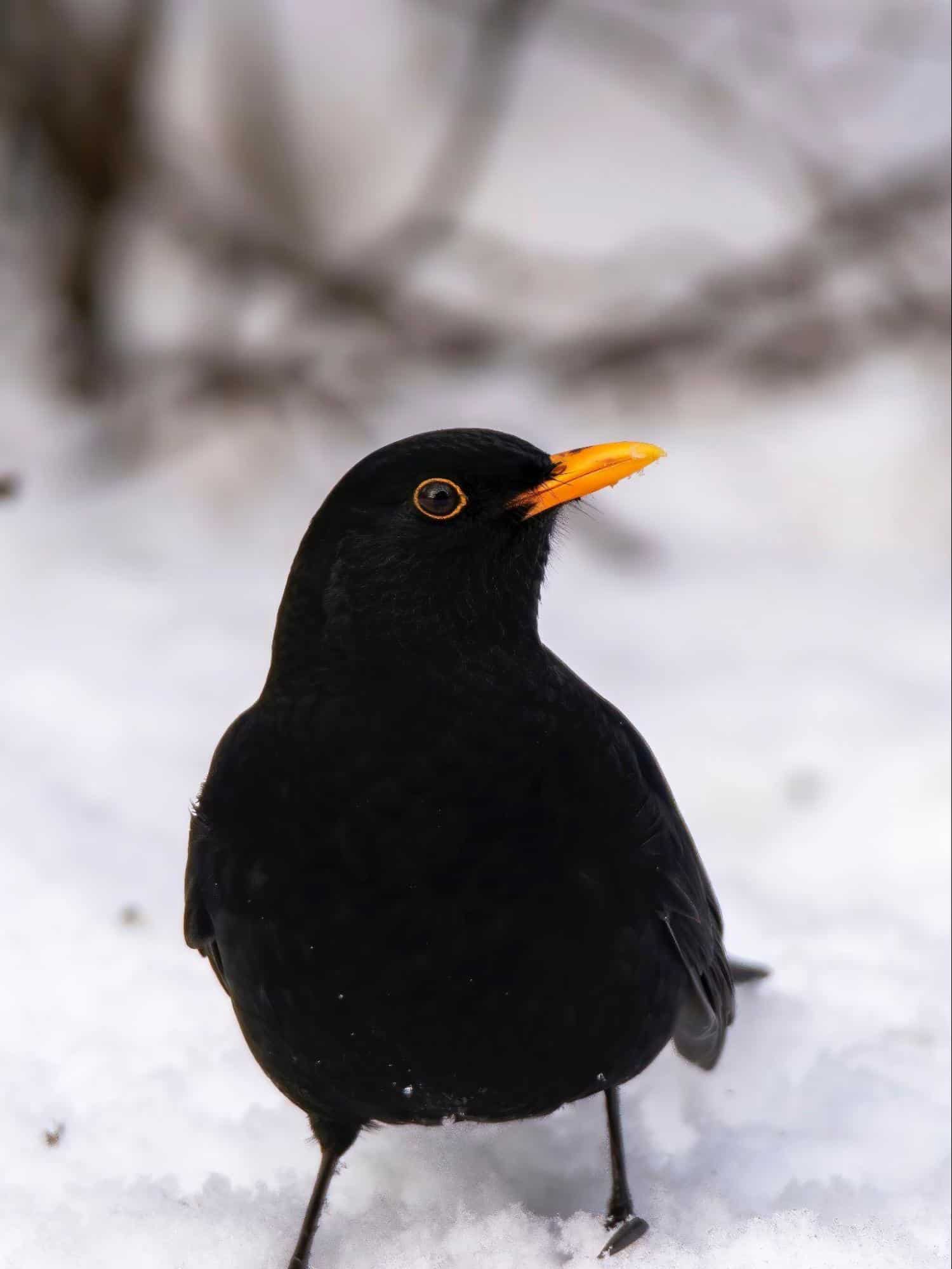 Photo by Ingemar Johnsson on Unsplash

Blackbirds are another common visitor to our gardens. They don’t usually leave the UK in winter, instead are joined by their migrant cousins from Scandinavia who can be distinguished by their black beaks.

Female blackbirds are brown and juvenile birds have a spotted chest, similar to the song thrush.

Blackbirds love to eat worms and enjoy fruit during autumn and winter. They will appreciate mealworms, dried fruit and oats on their bird table. 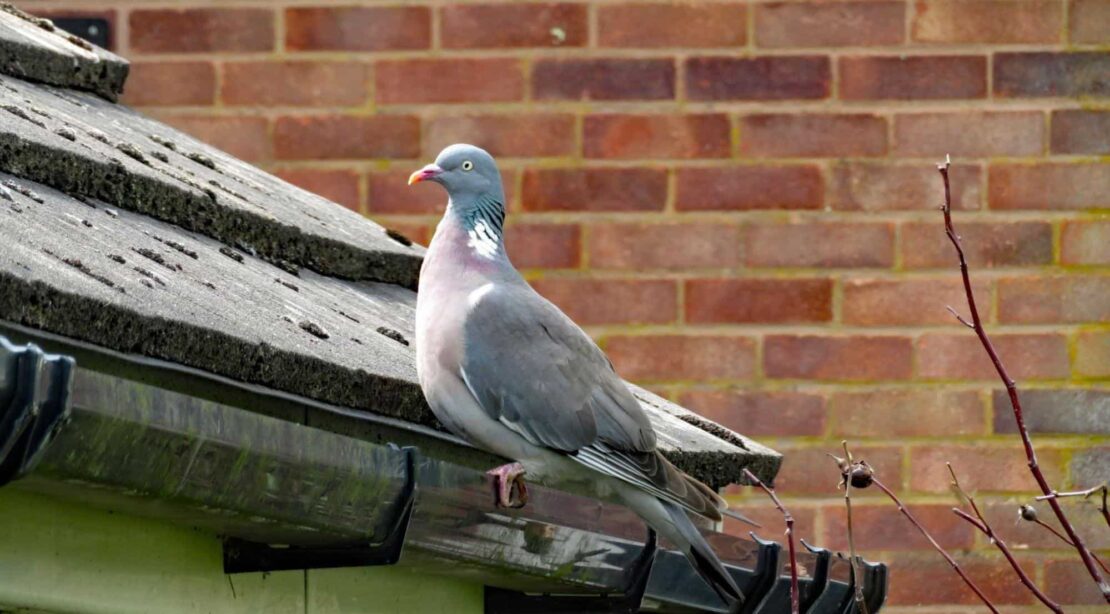 Photo by Ace Gamer on Unsplash

With its distinctive cooing call, the large wood pigeon is a familiar garden visitor throughout the year. Not fussy about their diet, pigeons will eat almost anything.

Although wood pigeons look like they’re waddling due to being overweight, it’s the dense feathers that make up for this extra weight, not fat.

Interesting fact – unlike almost all other birds, wood pigeons suck water up through their beaks like a straw. 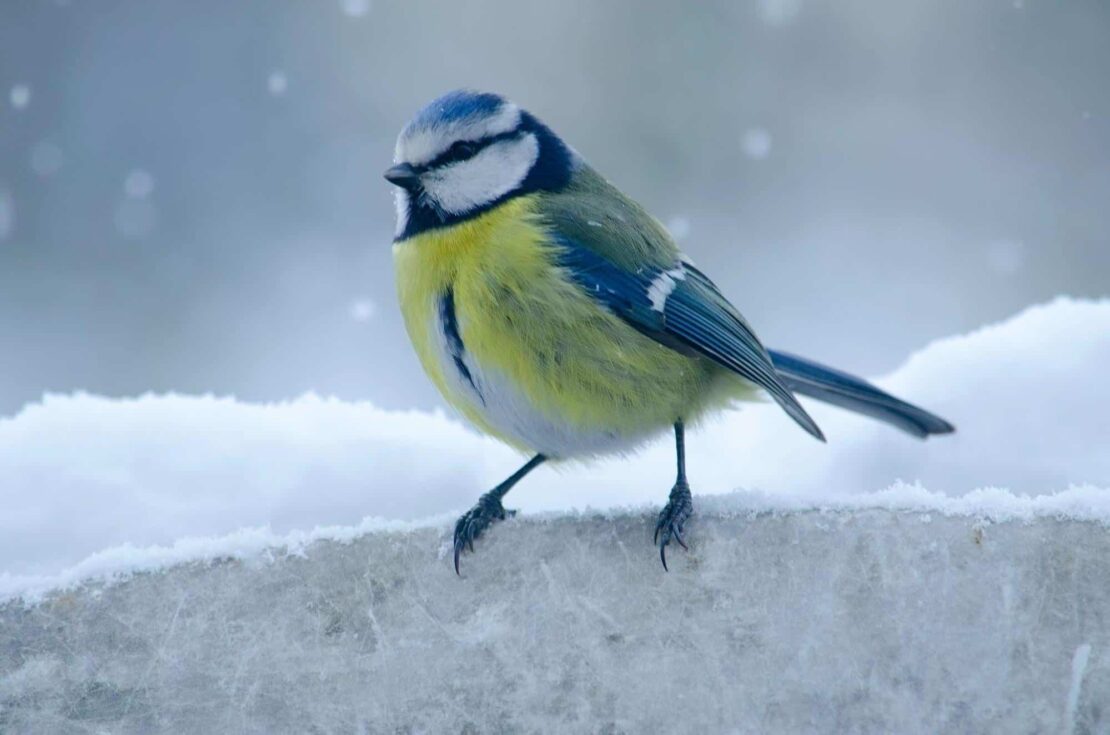 Photo by REGINE THOLEN on Unsplash

Blue tits are one of our most unusually coloured birds, their distinctive blue feathers making them instantly recognisable and one of our favourite feathered garden friends. Blue tits are fairly sedentary but a few migrate to the UK from Northern Europe during the winter.

Native to oak woodlands, blue tits spend much of their time foraging for insects among the leaves. They tend to move around in small flocks which can include other species like the goldcrest.

Blue tits adore juicy caterpillars but you can feed them peanuts and seeds during the colder months. 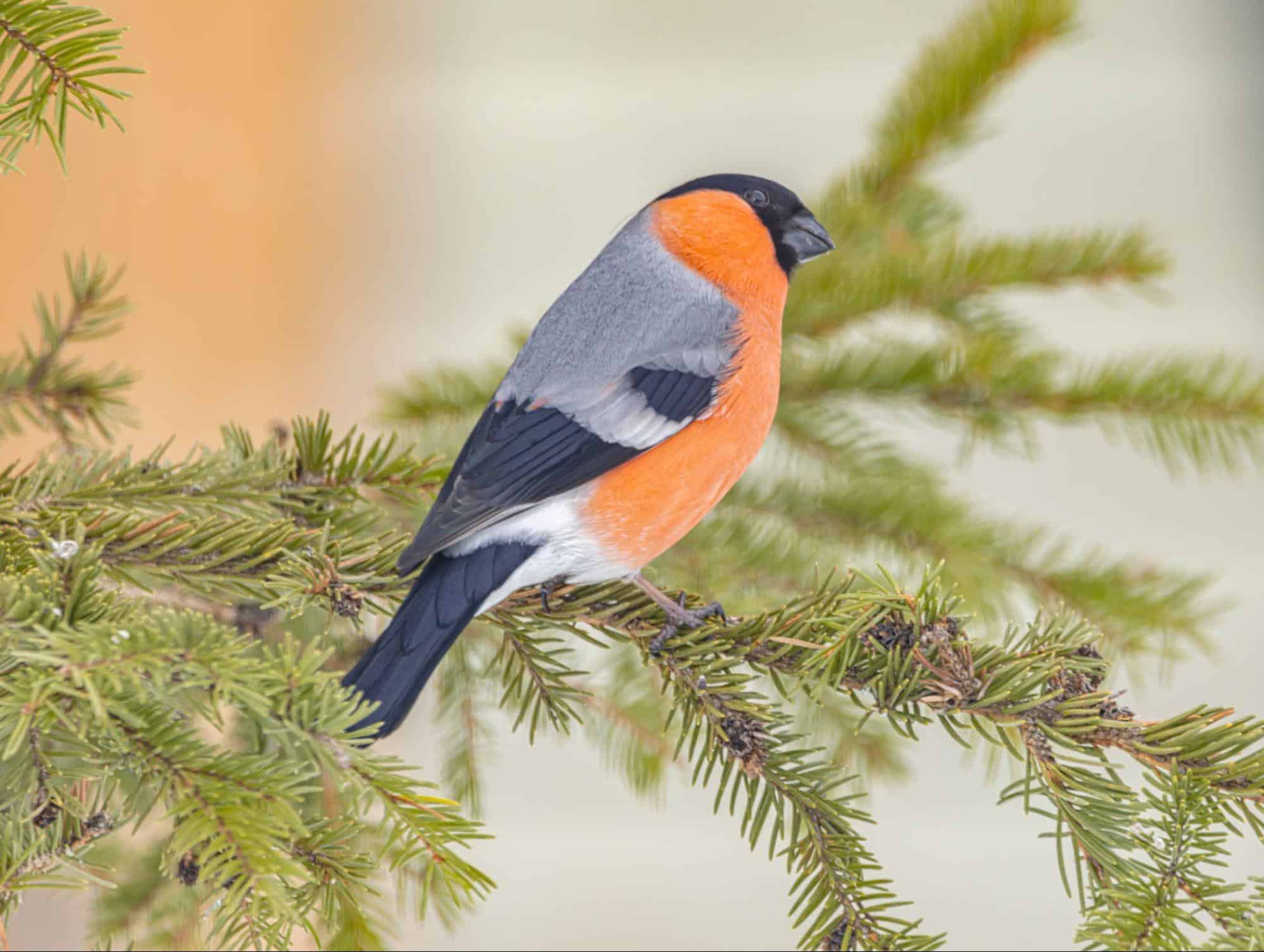 Photo by Lasse Nystedt on Unsplash

These well-dressed little birds are easy to spot with their colourful chests and black, white and grey wings. The male birds have brighter chests and cheeks whilst females have a light pink chest.

During winter, our resident bullfinches are joined by birds from Northern Europe. These birds are slightly larger and bolder than the shyer British bullfinches.

Bullfinches live in orchards, woodlands and farmland but will visit gardens, especially if there is a plentiful supply of seeds in a hanging feeder. They can be cheeky and are partial to a blackberry or currant from your fruit bushes. 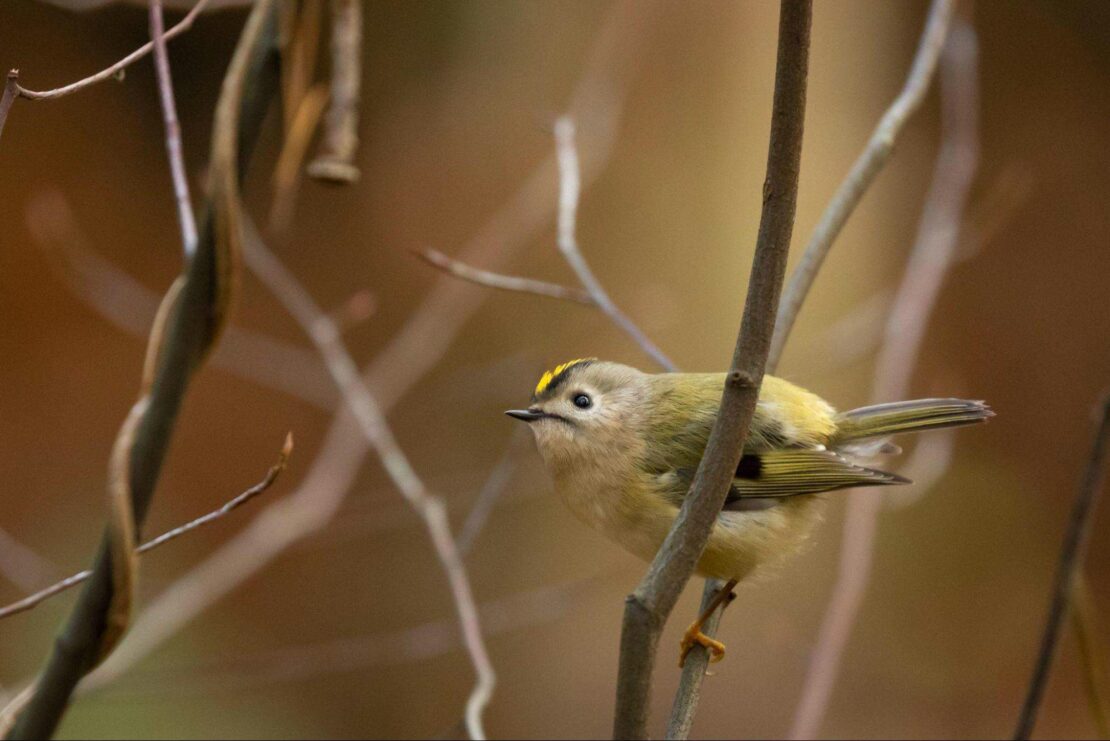 A miniature visitor to our gardens, the goldcrest is the UK’s smallest bird weighing in at just 6.5 grams, that’s about the weight of a pencil.

Like some other species, pocket-sized goldcrests lower their metabolic rate in freezing temperatures to conserve energy, helping them survive the tough winter months.

Goldcrests adore insects so try leaving insect-packed suet pellets on a bird table to bring them to your garden. 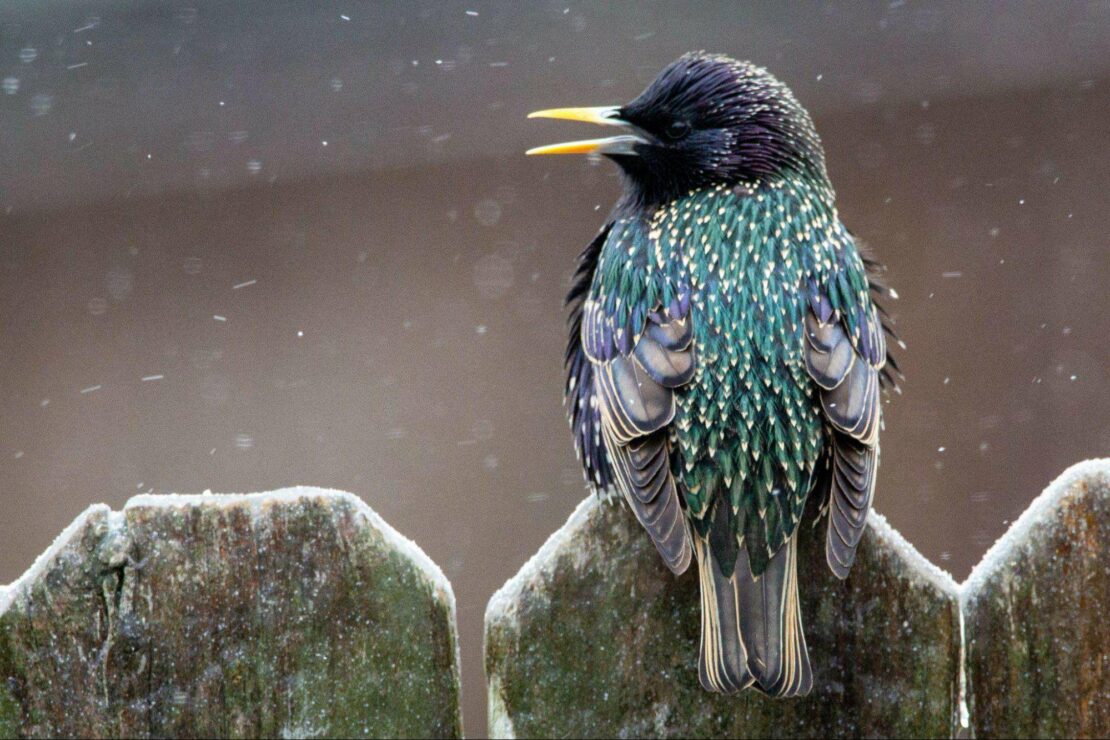 If you’ve ever been lucky enough to witness a breathtaking starling murmuration, you’ll have seen thousands of these jewel-coloured birds swooping through the autumn evening sky. The birds flock together to confuse predators and to keep warm.

Our native starlings are joined by thousands of migrant birds from Eastern Europe who’ve fled the harsh winter in search of food. Starlings aren’t fussy eaters but their favoured snacks include worms, snails, fruit and seeds.

Did you know? A starling murmuration can include hundreds of thousands of birds. The largest recorded contained over 400,000 starlings. 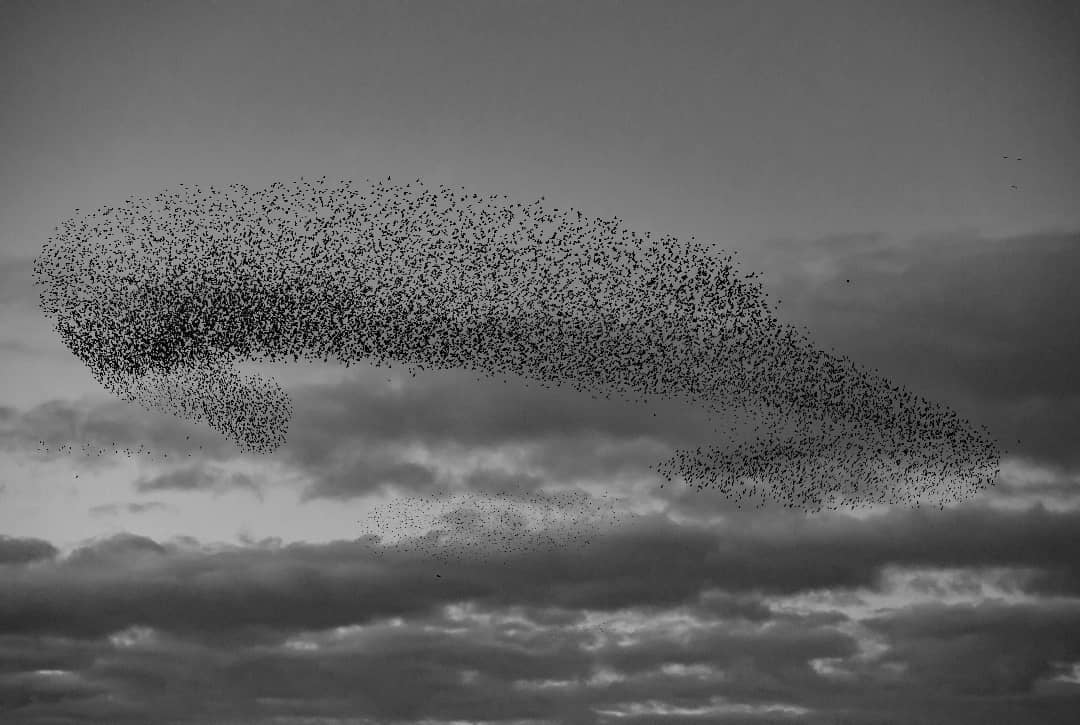 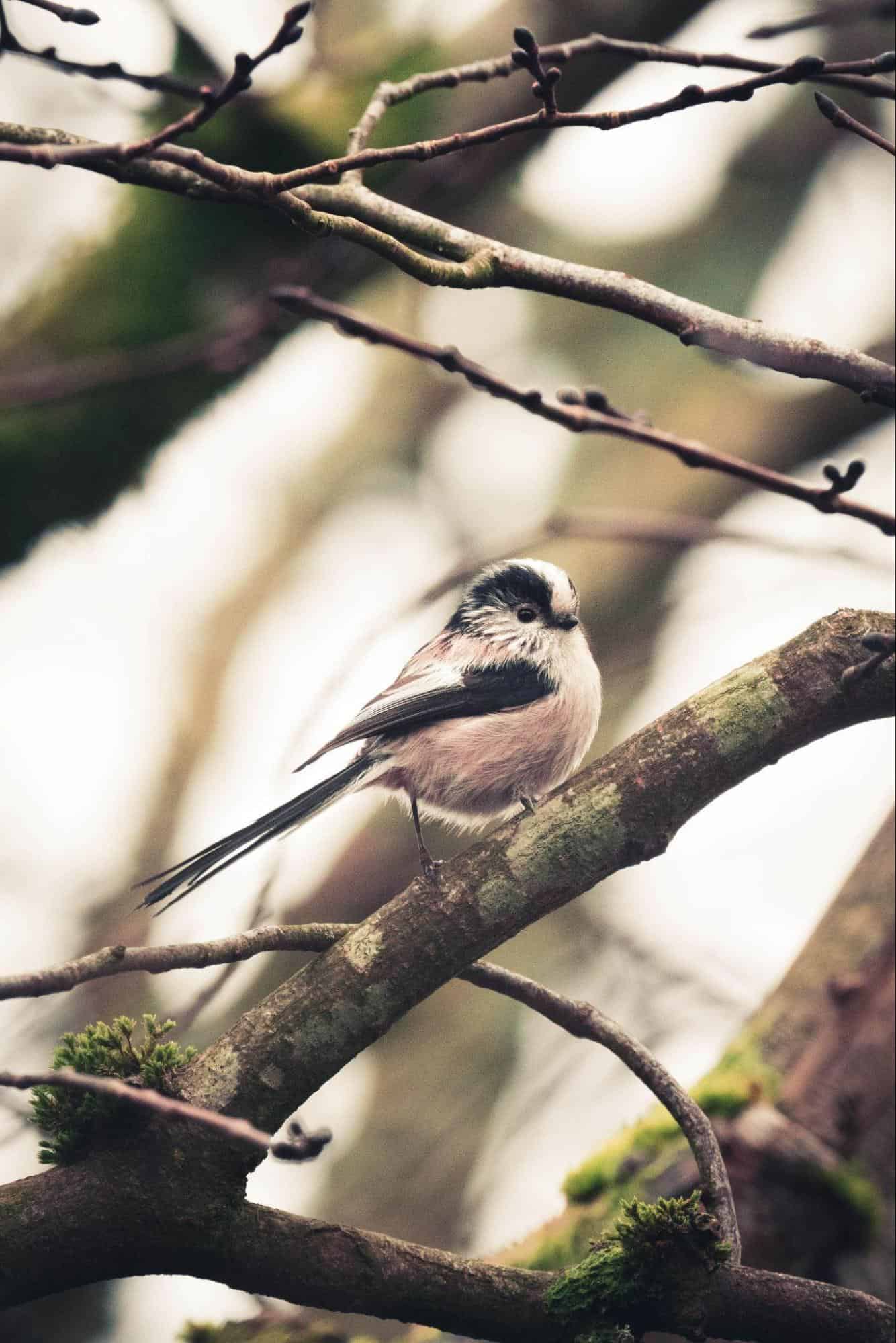 Photo by Jonny Gios on Unsplash

The fluffy long-tailed tit is another tiny bird, measuring around 6cm excluding the tail. Widespread throughout the UK, these monochrome birds huddle together in family groups for warmth when the weather is at its coldest.

These little birds often lose their eggs to predators but instead of building a new nest, they regularly support another pair of nesting birds. This remarkable behaviour benefits the baby birds and gives valuable experience to the helpers that they can use for their offspring.

Long-tailed tits mainly eat insects but will be attracted to suet pellets and peanuts. 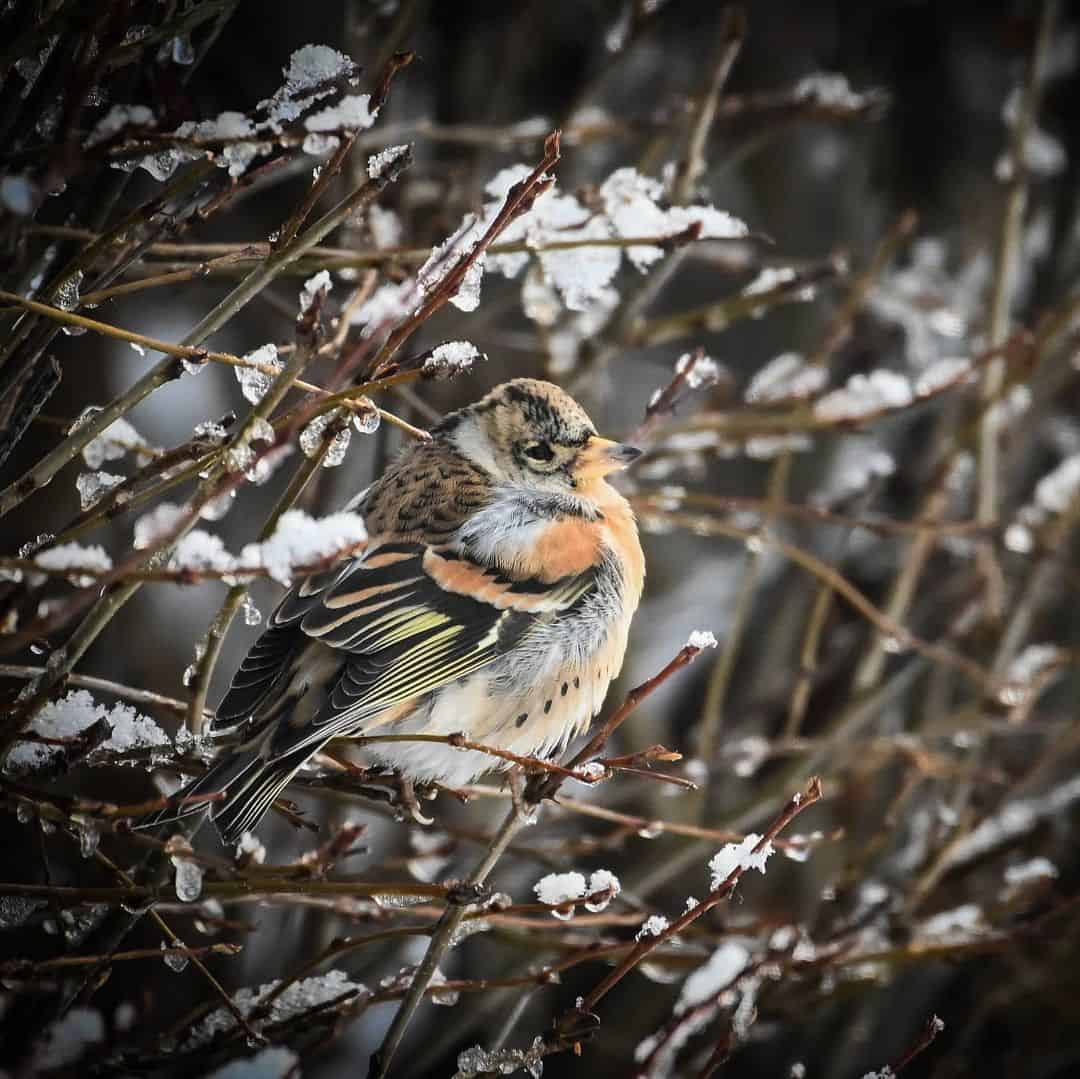 Bramblings belong to the finch family and are visitors to the UK from September to April, migrating from Scandinavia and Western Siberia. It’s hard to see how our winters are favourable but considering temperatures in Siberia can fall as low as -40°C, it’s the only way these birds can survive.

Bramblings can form flocks of thousands, sometimes joining with chaffinches. They enjoy eating seeds in winter. 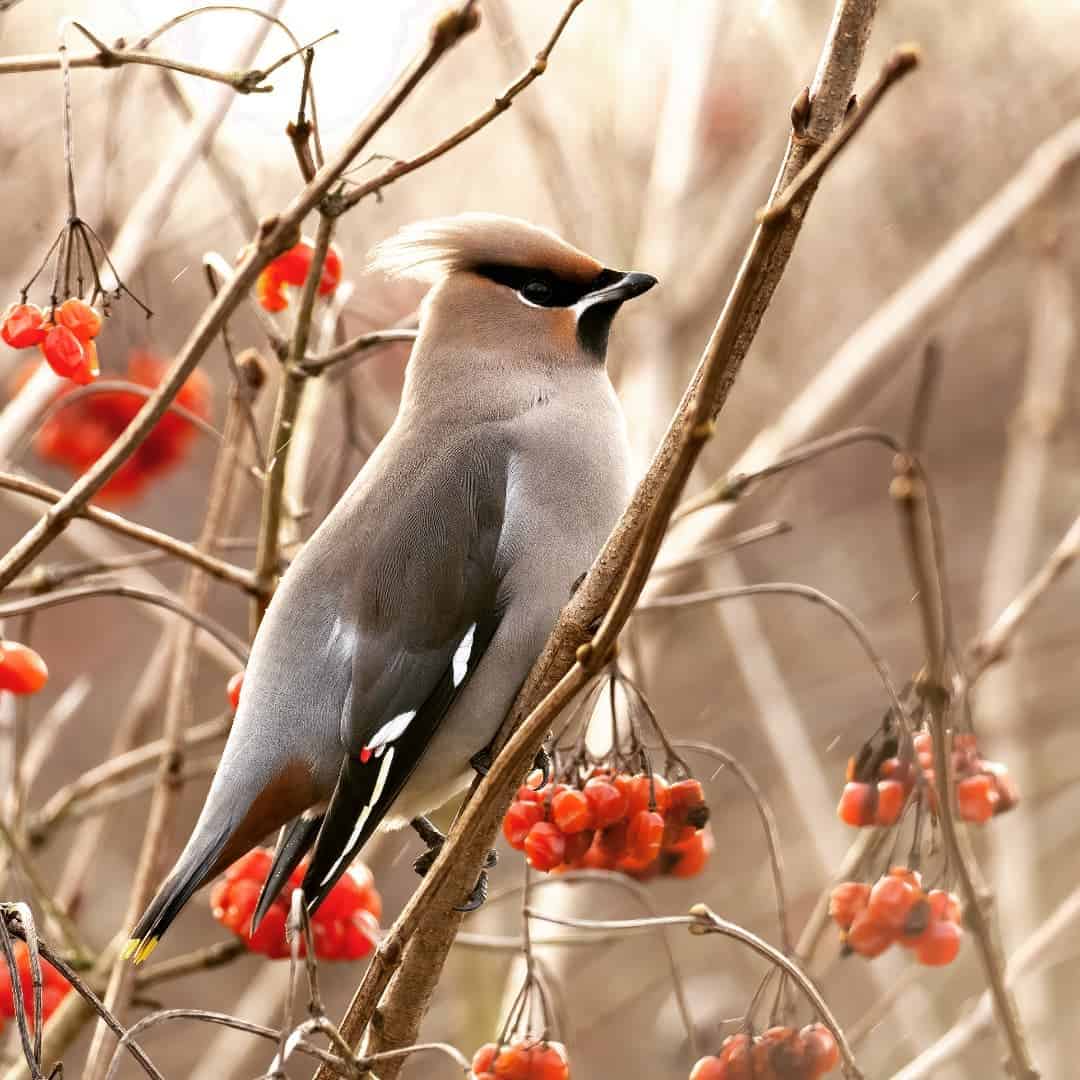 Like the bramblings, these beautiful birds are also winter visitors to our shores. They migrate from Scandinavia and can be seen in gardens from October and November to March. How many come to the UK depends on the availability of berries on the continent.

Waxwings are striking, starling-sized birds with distinctive crests. They love to eat rowan, hawthorn and sorbus berries along with rosehips. 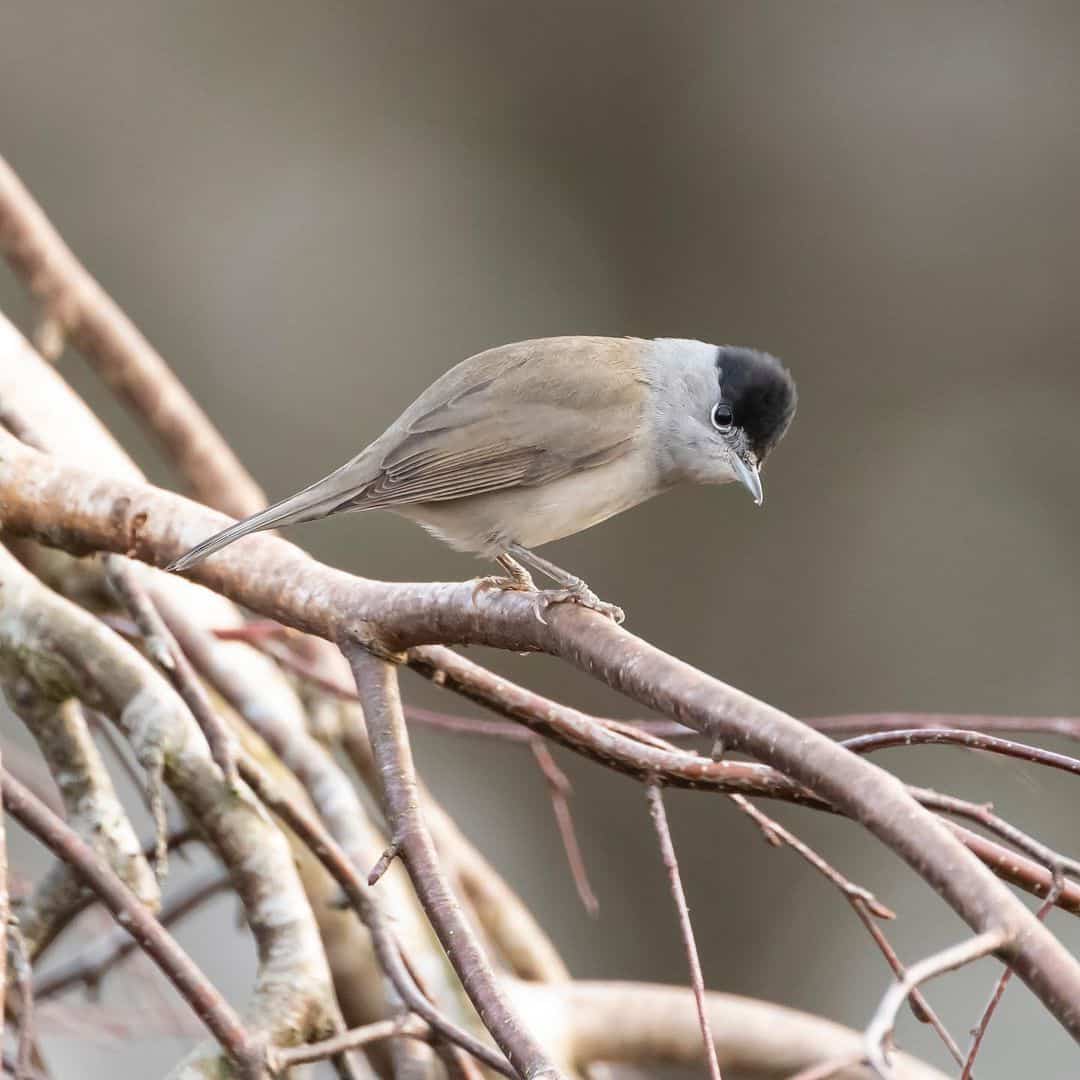 Blackcaps used to leave the UK to spend winter in Northern Africa or Southern Europe but due to the increase in people leaving food out for birds during the winter, many stay and enjoy the easy pickings. They’re mainly found in the southwest of England, where mild temperatures boost their winter survival chances.

Each year, the RSPB encourages everyone to record the birds seen in their gardens in a one hour window. This year’s event takes place from 28-30 January – click here to find out how to take part.

Whilst I’ve written this article on a mid-winter day, I’ve spotted a robin, wood pigeon, crow and a blackbird in my garden.

How can I attract birds to my garden in winter? 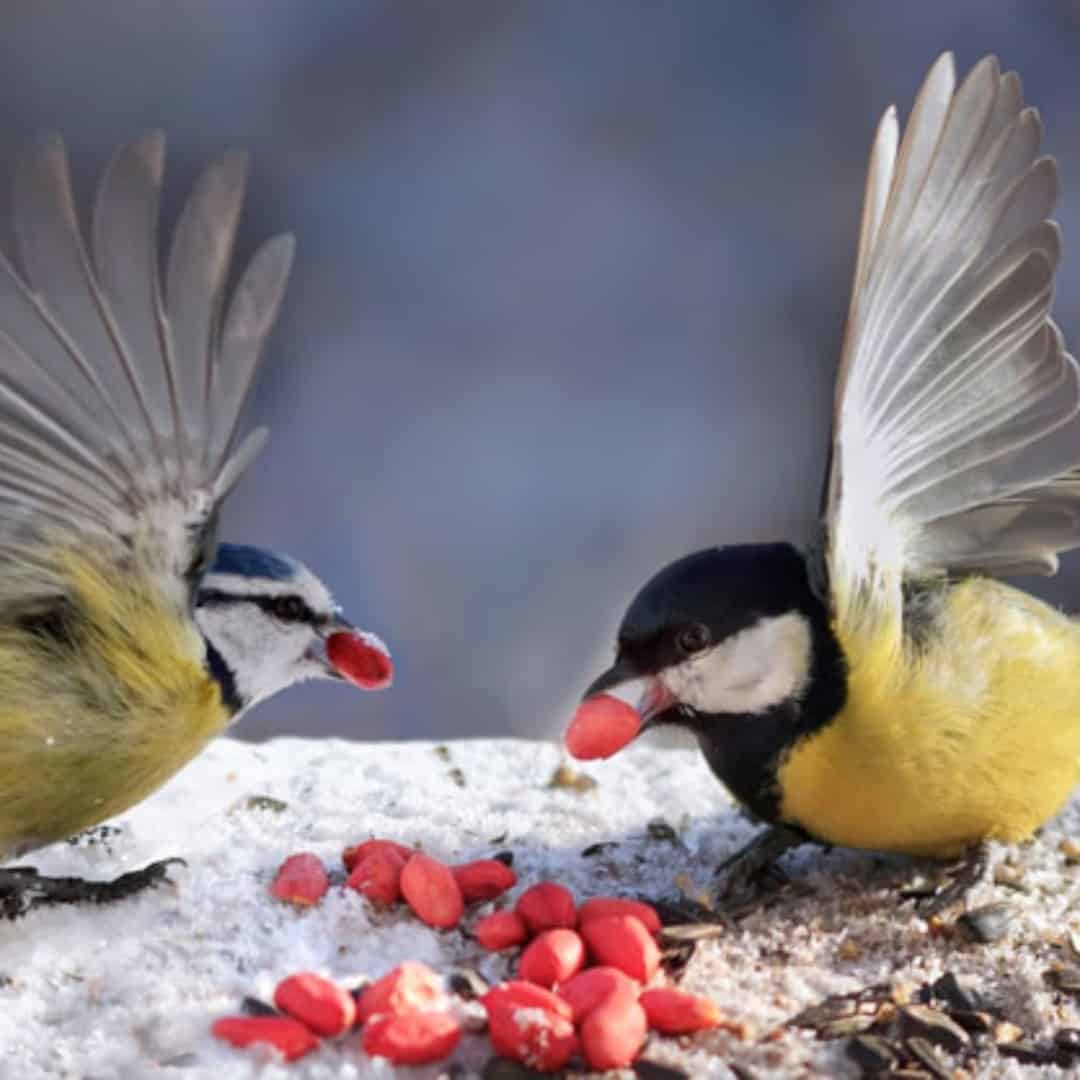 Like most creatures, the best way to attract birds to your winter garden is to leave out food. I’ve listed the preferred food of the species above and it’s good to leave out a selection to tempt a variety of different birds. Keep in mind whether the birds are natural ground feeders like robins and blackbirds, or prefer to eat from a bird table or hanging feeder.

Birds will also benefit from plenty of shelter in dense trees and hedges.  You might like to plant some berry bushes to attract birds like waxwings.

If, like me, you have cats, consider placing food somewhere that the cats can’t get to.

Which birds stay in the UK for winter?

An increasing number of birds are staying in the UK for winter due to rising temperatures and more people leaving food out for birds. Robins, blackbirds, pigeons, sparrows, starlings and blue-tits are all native to the UK and will stay for the winter. 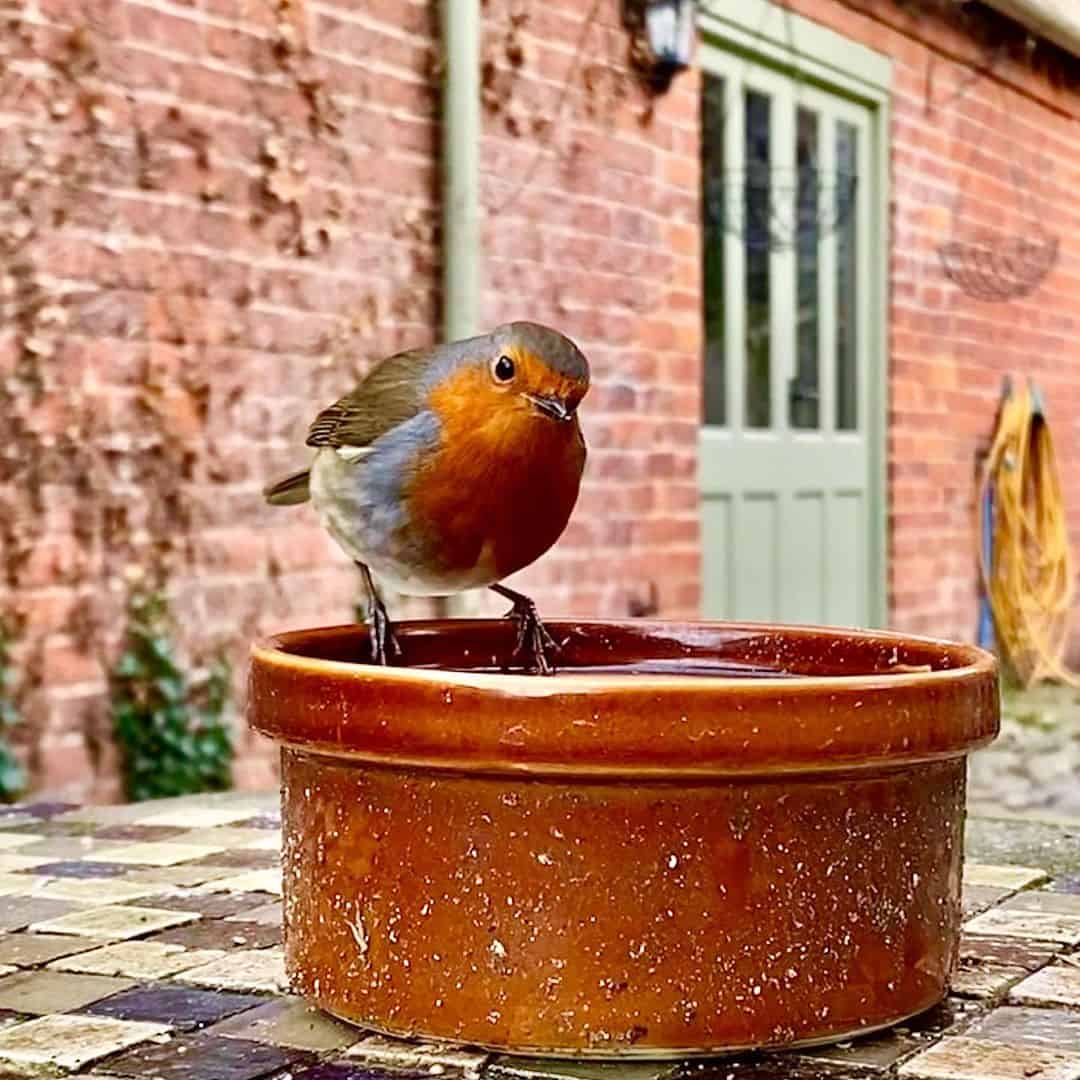 What birds come out during winter?

Apart from those mentioned above, some birds to look out for in winter include coal tits, dunnocks, fieldfares, redwings and nuthatches.

How do I keep my garden birds warm in the winter? 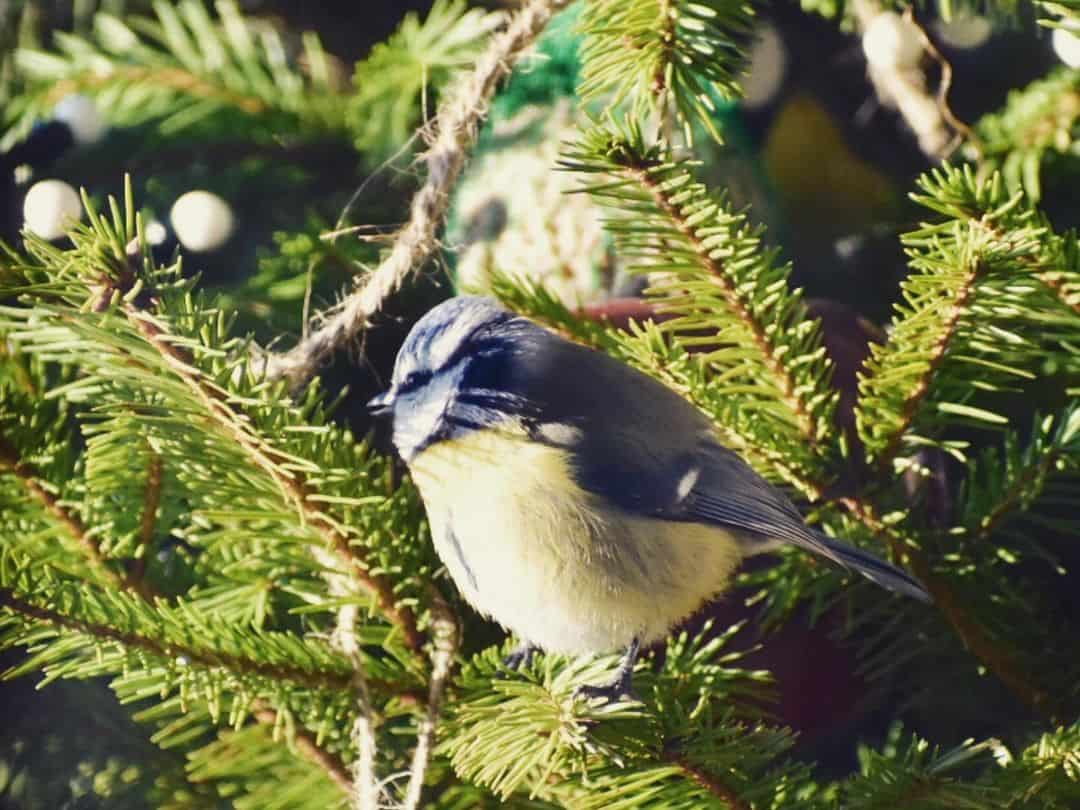 Make sure birds boxes are lined and filled with a layer of wood shavings for roosting birds. During the coldest months, birds will benefit from the energy boost fatty foods provide and a supply of fresh water.

Attracting wildlife to your garden takes time, and birds are no exception. Leaving a varied selection of food at different heights and providing fresh water is a great place to start.  With a little patience, you’ll soon have an array of feathered friends flocking to your garden. 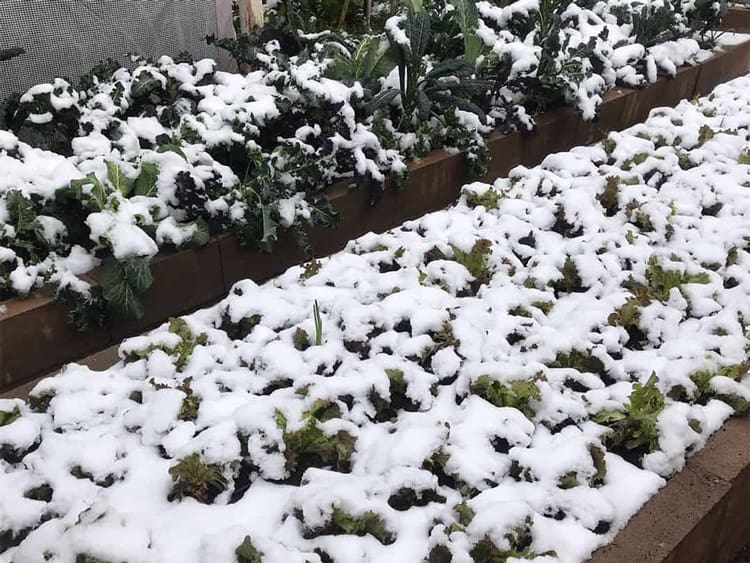 15 Vegetables to Plant in Autumn and Winter 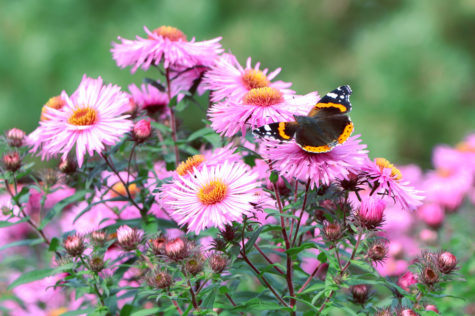 Flowers and Plants for Attracting Butterflies 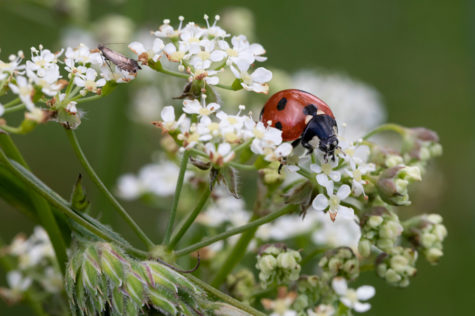 Garden Insects: What are Good and Bad Bugs? 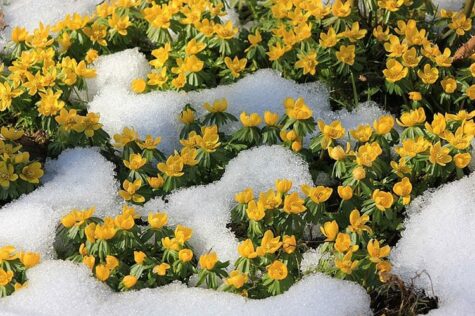 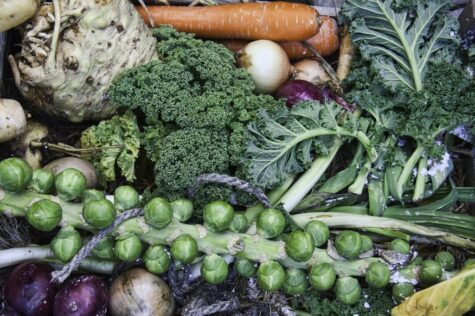 Top 14 Vegetables To Grow In Winter 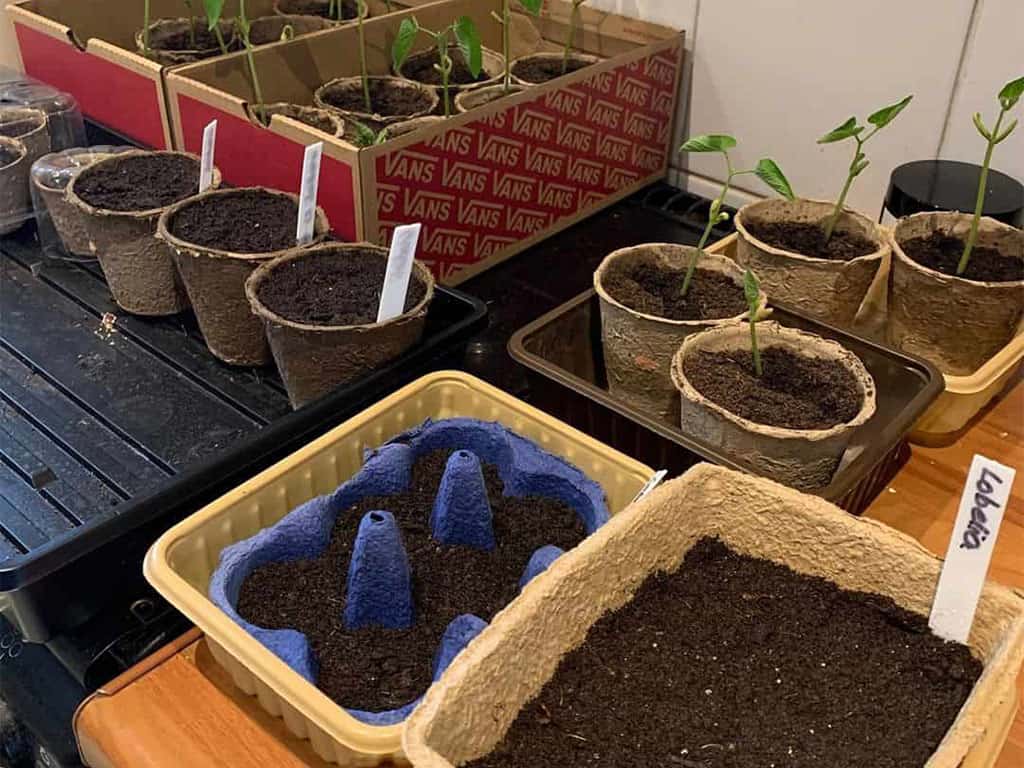 What to Plant in January: 12 Flower & Vegetable Seeds to Sow Now