If you’ve noticed a few toadstools seemingly popping up out of nowhere, you might be worried about the safety of your children and pets and also the health of your lawn.

Unfortunately, there are no golden rules when it comes to identifying mushrooms. Many deadly ones have the same features as edible ones. To be safe, treat them all as dangerous until proven otherwise. 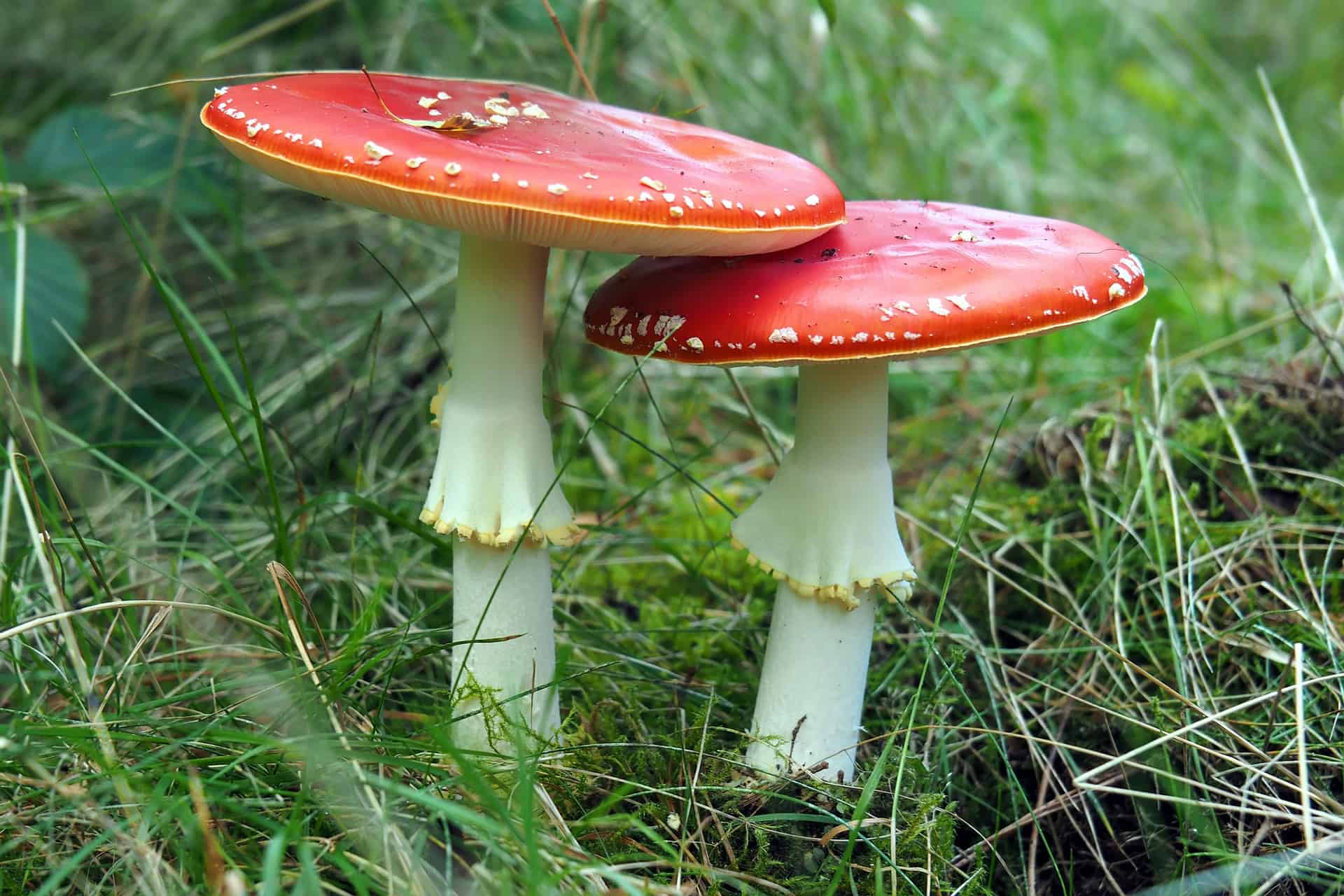 If you have kids or curious pets, make sure to identify the ones in your garden as soon as possible. Here’s what you need to know.

Why are mushrooms growing on my lawn?

Common lawn mushrooms on your lawn are an indication that you have lots of organic matter in your soil. Mushrooms need lots of moisture, organic matter, shade and warmth to grow. If you have pets, their faeces might also trigger mushroom growth.

Mushrooms break down organic matter like animal faeces, tree bark, rotting wood and leaf matter. By doing so, they help plants by providing them with nutrients from these materials. If you see a mushroom or two, don’t immediately rip it out. It might help your lawn in the long run.

Simply put, if you have fungi growing on your lawn, the conditions are perfect for them to thrive. Keep in mind that just because you’ve never seen a mushroom on your lawn before, they weren’t always there. The fungi that cause mushroom growth can live in the soil for years and are called mycelium. In fact, the mushrooms we see are simply how the mycelium reproduces. Think of them like a flower of sorts.

When the weather, season and temperature are favourable, you will see mushrooms popping up overnight.

Now, it’s time to identify them.

VERY IMPORTANT: Don’t eat any mushrooms mentioned in this article despite them being labelled as edible or harmless. It’s extremely easy to misidentify a poisonous mushroom.

There are several lawn mushroom types in the UK. Not all of these are desirable, however. Let’s take a look at five of these species. 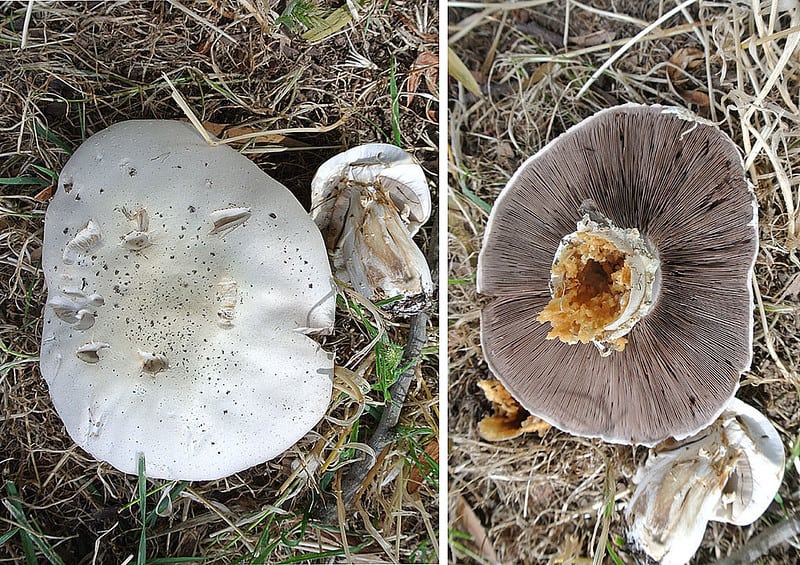 Horse mushrooms, also known as Abrahams, are large toadstools that appear in autumn, spring and summer. These mushrooms are harmless with a rich, strong taste making them quite a feast. If you have any of these in your backyard, you’ll notice them appearing from around May to October.

These fungi are extraordinary, growing to a height of about 10cm with an average cap width of around 25cm. You’ll often find them growing in rings around pastures, meadows, lawns, road verges and parks. 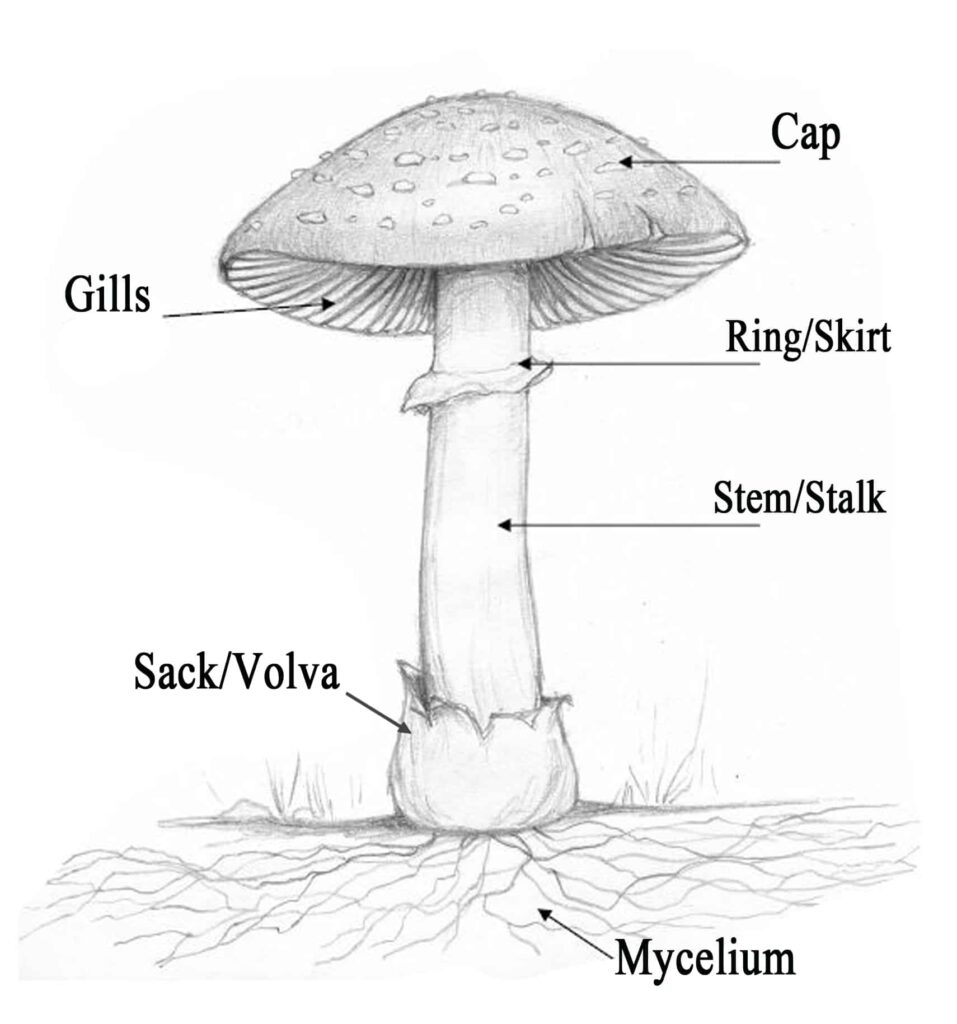 The parts of a mushroom. Image credit: Yellowelanor.com

Horse mushrooms can easily be confused with the yellow stainer (see below). This mushroom smells like Indian ink, hospitals or iodine and is not edible. When bruised, you’ll notice it turning a chrome yellow colour. 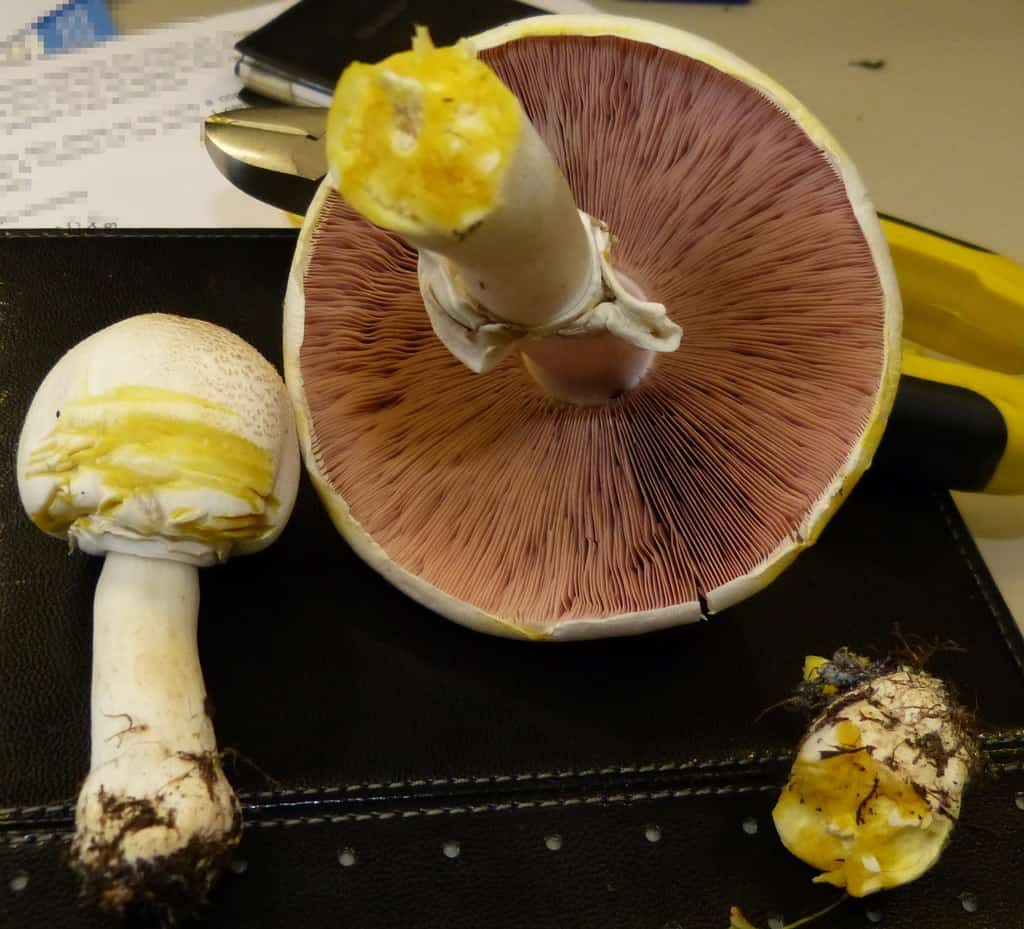 Yellow stainer mushrooms are large fungi that appear in spring and summer. These mushrooms are poisonous and can cause alarming symptoms if consumed. If you have any in your garden, you’ll notice them appearing near hedges, in shaded areas with grass and under shrubs usually from around July to November.

You can expect this mushroom to grow to a height of around 16 cm with an average cap width of around 16 cm as well. They also grow in circular patterns in much the same habitat as the above-mentioned horse mushroom. 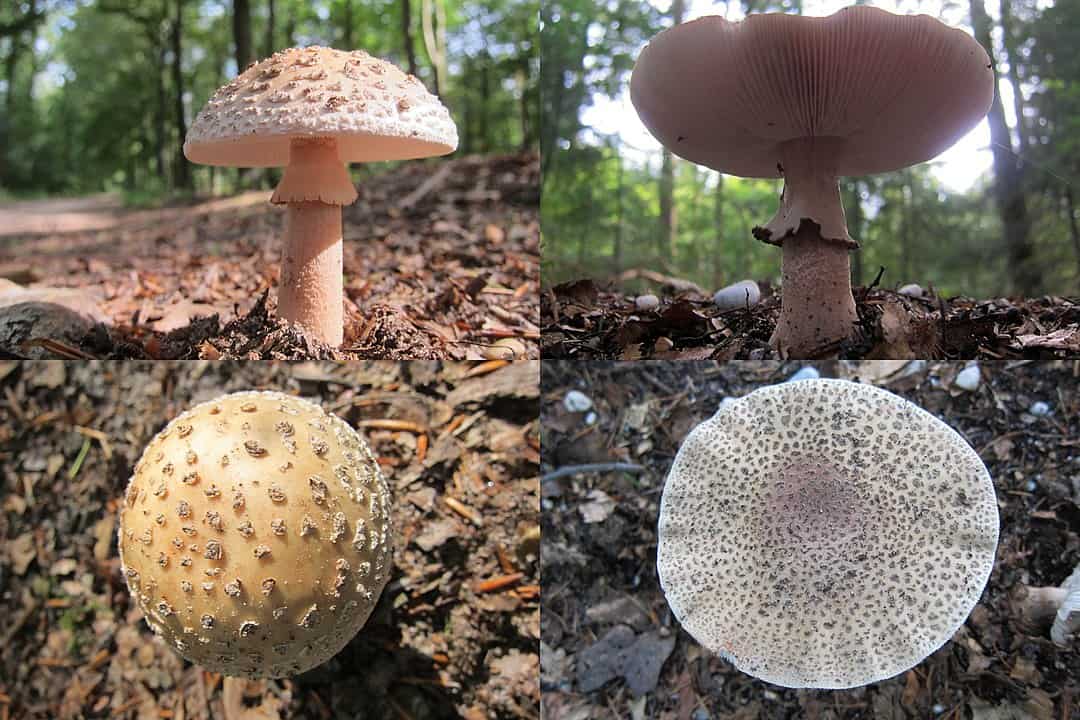 The blusher is another very common mushroom seen in gardens. You’ll often notice this mushroom species appearing before any others. Blushers usually start appearing early in May and can be found until November.

This is also a fairly large mushroom, growing to around 15cm high with an average cap width of 15 cm as well. This is a great size for eating. Great care must be taken when identifying this fungus, however, so it’s best to avoid eating ones from your garden and buy them from the supermarket instead.

The blusher mushroom has the following identification points:

Extreme care must be taken when identifying this mushroom since it can easily be confused with Panthercap (Amanita pantherina) which is deadly when consumed. The main difference between these mushrooms lies in their skirts, but if I was you, I still wouldn’t risk it. 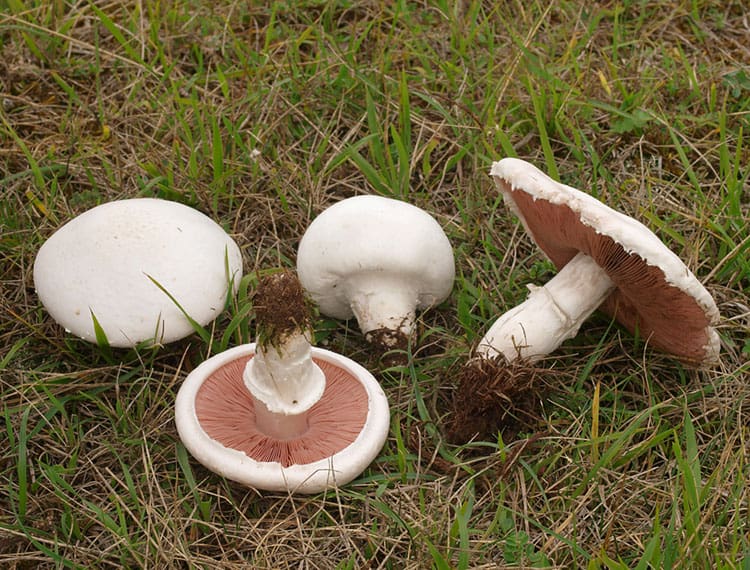 The field mushroom, also known as meadow mushroom, is another very common mushroom seen on lawns. If conditions are favourable, you’ll notice these fungi popping out around May, and can be found until November.

This isn’t the largest of the mushroom species having an average cap width of around 10 cm and growing to a height of around 8 cm. This used to be a very common eating mushroom but is becoming more scarce due to habitat destruction and chemical sprays.

Care must be taken when identifying this toadstool. It can easily be confused with the yellow stainer or even Agaricus pilantianus. Both of these smell like iodine or Indian ink, in other words, not edible. 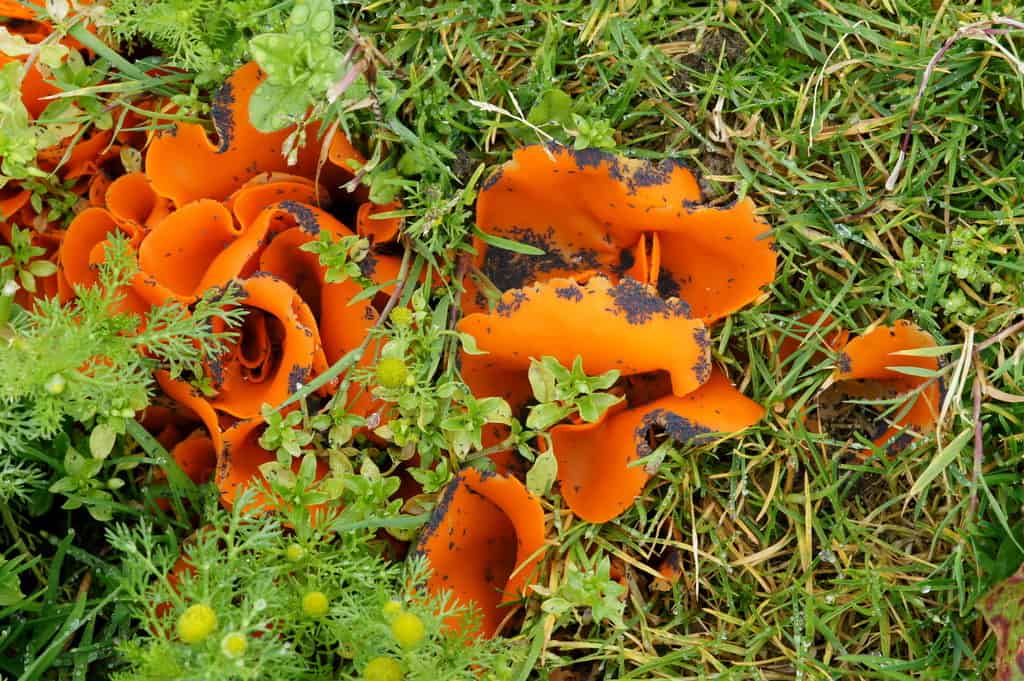 The orange peel fungus is a very unique type of mushroom that is very common in localised areas. If you see one, you’ll most likely find many of them around. If the conditions are just right, you’ll notice these fungi appearing on your lawn during the months of August to November.

This is a medium-sized ‘shroom with an extremely unique appearance. It grows to about 5cm high and has an average cap width of 10cm. This is an edible mushroom that is rarely mistaken with anything else but beware.

How do I know if my lawn mushroom is poisonous?

Can I get rid of the mushrooms on my lawn?

Lawn mushrooms can be beneficial for your garden, but not everyone wants them around. They can ruin the appearance of an otherwise pristine lawn, and some can even be dangerous. Most, however, are harmless, but if you want to be rid of them once and for all, you can try the following:

Mushrooms need a moist area and a favourable climate to grow and thrive. If you reduce the moisture on your lawn, you should be able to control the mushrooms to some extent, at least for part of the year.

Following general lawn care practices, like aerating the lawn, will reduce the chances of mushrooms appearing. If you can get the timing just right, you shouldn’t have a problem with mushrooms.

Mowing the lawn won’t take care of the fungus, but it will prevent mushrooms from appearing. Those that do make an appearance will be cut down pretty quickly before they can mature and spread.

Pruning dense shrubs and trees will allow more sun on your lawn. Mushrooms don’t like to grow in full sun which means they won’t appear as often.

You can also opt to manually remove the mushrooms as they appear. This technique requires you to catch them before the spores are released, however.

Last, but not least, you can try a chemical treatment. This is not advised if you have pets or a vegetable garden close by. The chemicals will kill the fungi, however, which means less chance of them resprouting any time soon.

Mushrooms aren’t a bad thing most of the time, so if you can, simply ignore them. They’ll only be around for a few days to a month or two anyway. If you’re too worried to leave them be, however, make sure to remove them safely. Use a glove when you touch them, just in case.

Please don’t try to eat any mushrooms mentioned in this article, it’s very easy to misidentify them and poison yourself. Mushroom identification can be fun, however, so make sure to get a book or website that gives proper descriptions and pictures to go with it. 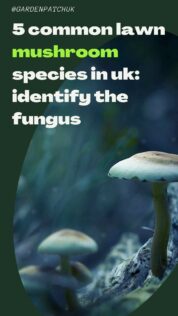 Save this pin for later 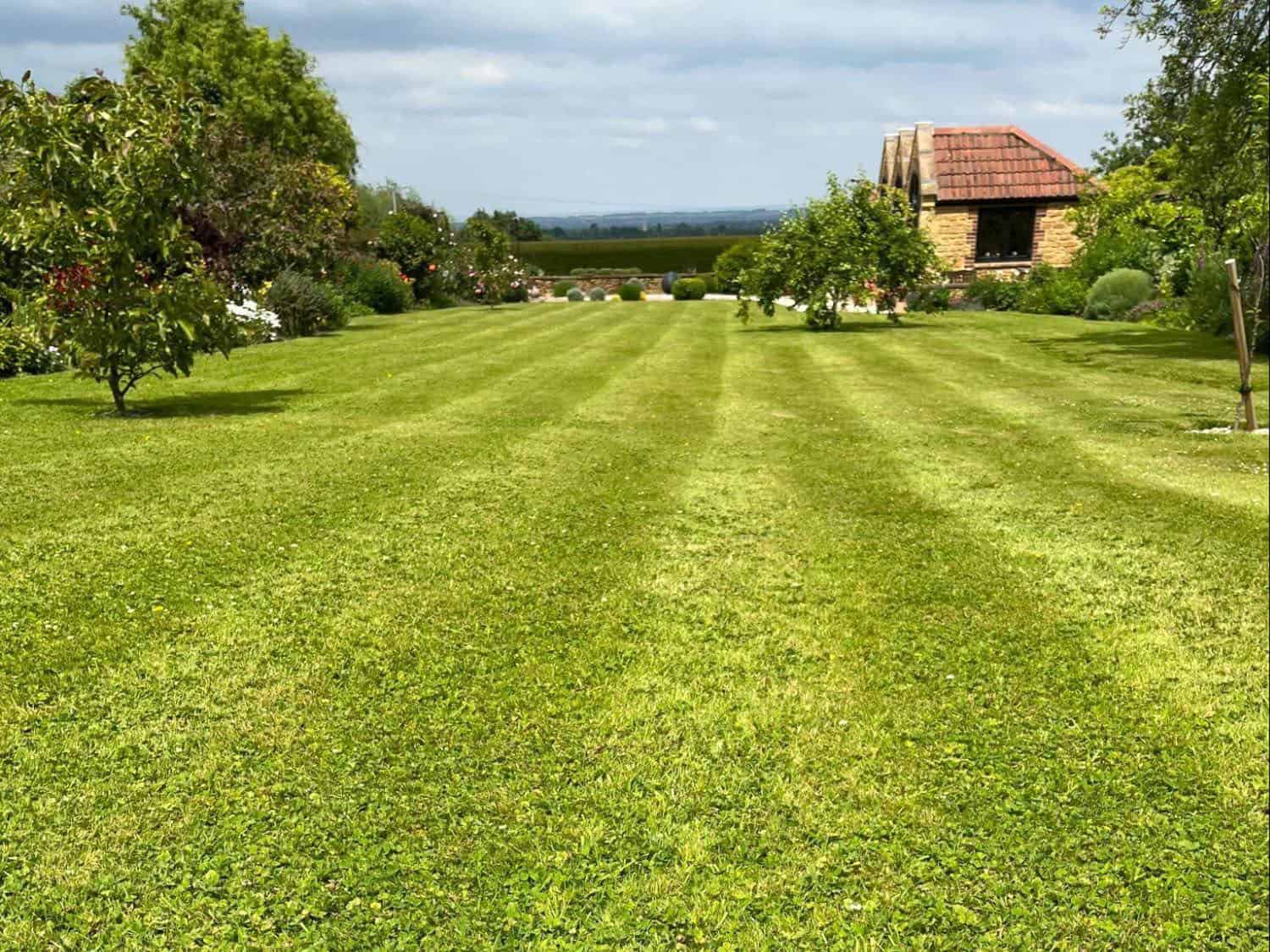 How Often Should You Weed and Feed Your Lawn in the UK? 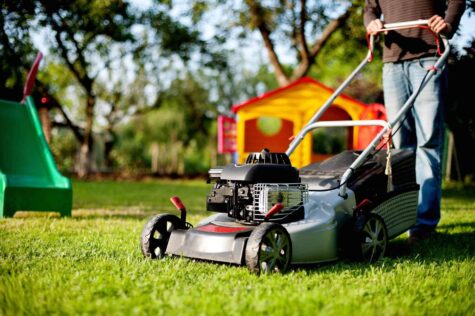 When should you Stop Mowing your lawn UK: last cut of the year 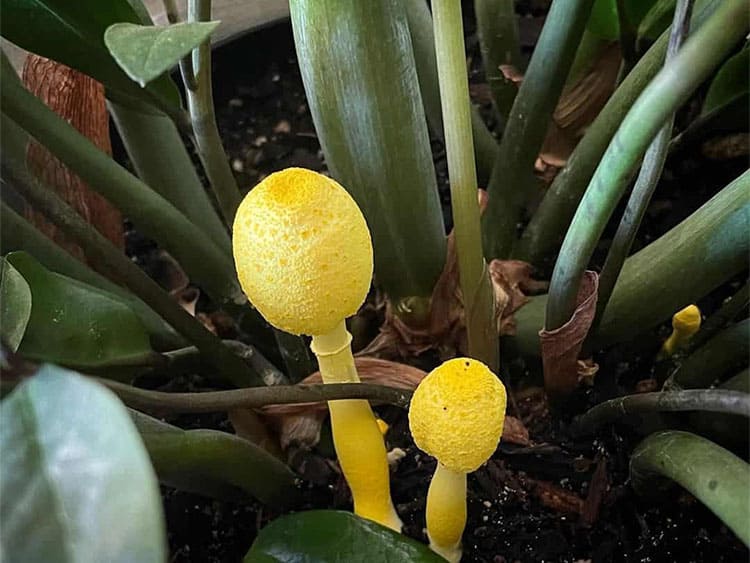 Why Are Mushrooms Growing in My Plant Pot? (How to Get Rid of Them) 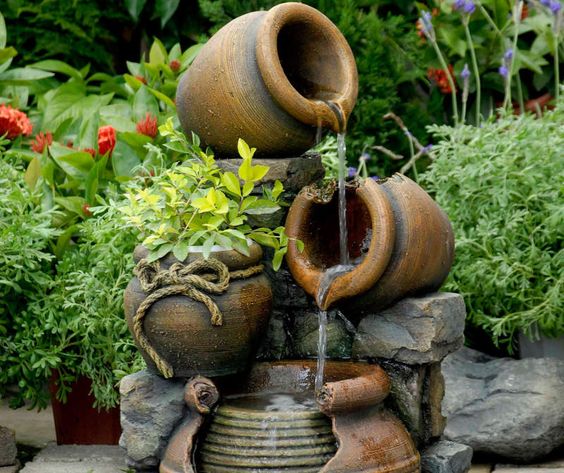 How to Build a Flower Pot Fountain 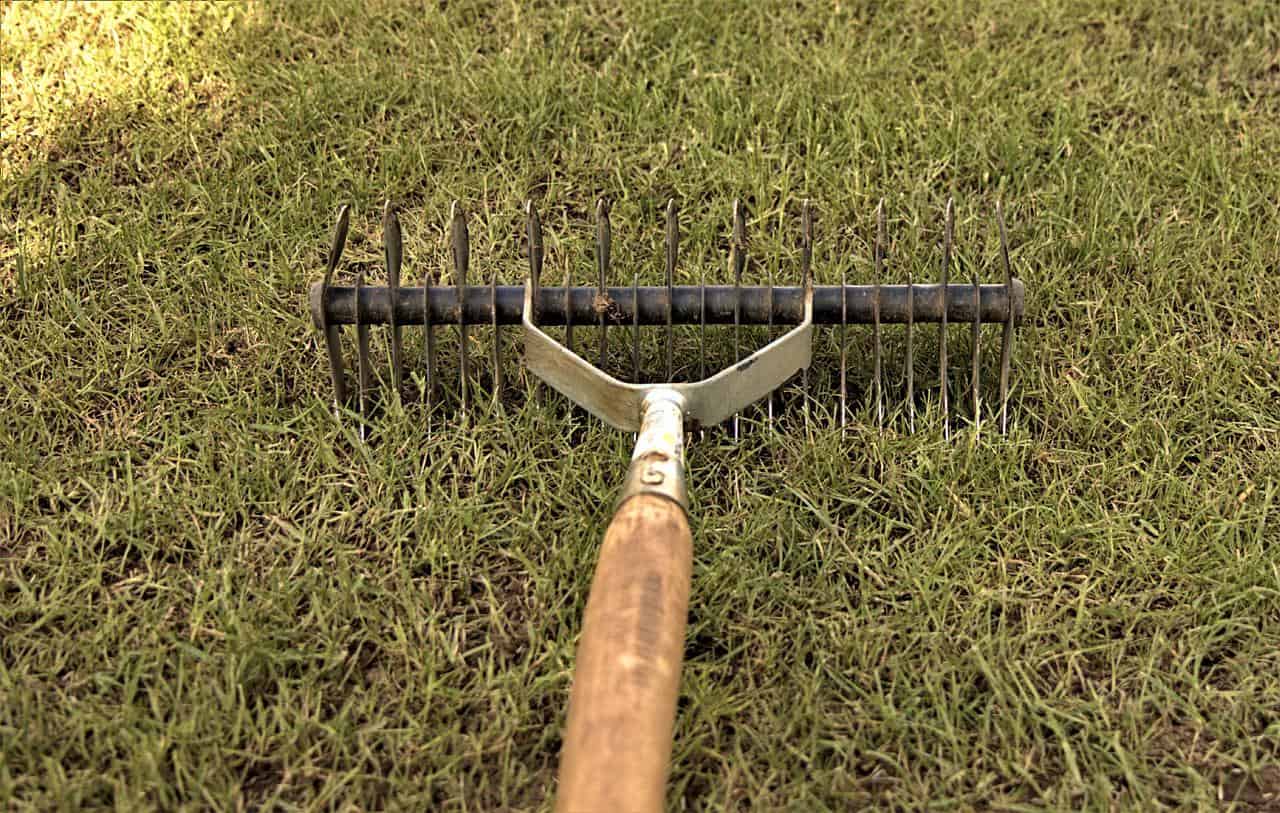 What to Do After Scarifying a Lawn: 9 Steps to Revive Grass